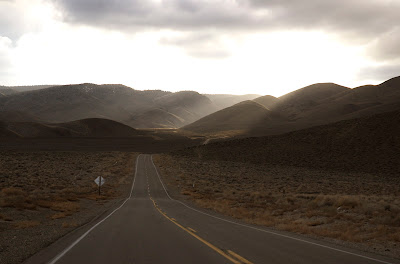 I met a stripper who worked summers in New York to pay for drama school in Montana. I knew she wasn’t lying because she had big shoulders. She smiled a lot, too, ingenuously, which was how I knew she couldn’t see the irony. Of all the actors I know, the ones who don’t live in the big cities are the happiest. In another time, being the best Iago in Cheyenne would have meant something.

“Is this life?” is a question best asked rhetorically, at the right moments, like when you ride the TGV to Paris and watch the fields of mustard and Syrah pass as you lunch on olive tapenade and onion confit with fresh bread. That’s just one instance.

Another great time to ask “Is this life?” is when you are in a car in the Nevada desert with your Mom and your Dad and your baby brother, with nothing around for miles and miles, and a mad, dusty herd of antelope race across the road just where you are, no coincidence, just jolly good antelope fun, because what would you do all day if you lived in the desert?

The radio might have been playing the Mothers Of Invention and you might have been eating some convenience store’s poor idea of food (Twizzlers), but nostalgia is wonderful because it mixes everything up. If I recall correctly, the sky burned orange from the setting sun, I chewed Indian frybread (was it with chili, or was that on a different, pre-vegan trip?), and Arcade Fire were singing the chorus to “Wake Up”.

In fact, it’s rare that you would actually ask “Is this life?” consciously and presently. That’s a question that is easily inserted into memories, or used at the moment of remembrance. To tell the truth, that train ride was a rotten time in my life, though I could pretend brilliantly that it was all just so marvelous. But that’s part of living, too. You’ve got to pretend, because it’s all pretty rotten out there.

I’m hardly a pessimist or a cynic. I take the long view, which makes allowances for all kinds of nastiness in the world. Things are so much better than they were even fifty years ago. Consider Jim Crow, the Berlin Wall, or the status of women in America. The world has changed for the better and has always done so. This government sucks, America is a shameful place to live in, and things don’t stand to improve for some time. But don’t worry: someday—not this November or even four years from then—Ralph Nader will be president. Utopia approaches and we’ll all have pie in the sky.

Have you ever considered the destiny of the human race? Leave out all that stuff about Armageddon and the Rapture and ruminate on where we might be headed. There’s no true end, just this: the mixing, the love and hate, the writhing mass of people moving over the planet and beyond it. This is it. We’re in it, this one time, and it will never be any different for anyone else. This is life. Am I doing it right?

Funny how that girl from Montana inspired this introspection. I think about her life without me, and also with me, and the happiness we’ll miss by losing each other. I only knew her for four-and-a-half minutes, but now she’s mixed up with me. She’s one of the ghosts in my shadow, one of the collection of shades that really are the bulk of me. We are each of us a network of souls, a stew of the disparate elements informing us. I am her now, too. I am all of you.
family Life memories

Blogger said…
I've just installed iStripper, so I can watch the sexiest virtual strippers stripping on my desktop.
July 23, 2018 at 6:29 PM