Now I am happy returned to my home, fleeting as it is, let the faithful be rewarded. Here is an update. (And let us rid ourselves of Dick Cheney, at least in this space.)

My budget flight with Air India gave me some pleasant surprises. It was the largest airplane I had ever been on, a 747 with an upper deck, accessed by a staircase we passed on the way in. At long last, a flight with first class, which I had begun to suspect only existed in the movies. 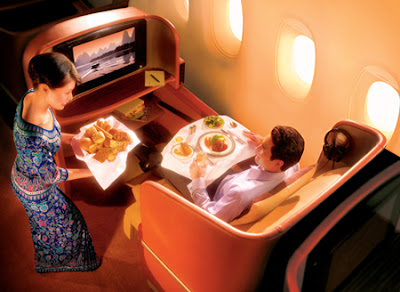 After some research into first class, because I couldn’t believe that executive class was the best thing there is, I discovered why people dedicate their lives to making money. It’s a different world up there, where people sleep comfortably and drink and eat gourmet meals and probably don’t even feel turbulence. That reminds me of a line from 100 Bullets, in which a bartender asks a slumming pub-crawler how it feels to move through life without any friction. 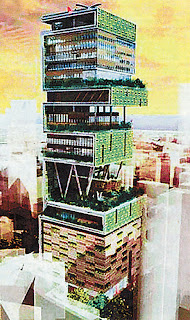 I, of course, will be relegated to coach for a long time yet, but since I have seen Versailles and now a glimpse of first class international air travel, my life has found its true trajectory: I want to be like that Indian billionaire who is building one of India’s tallest skyscrapers, which will serve only as a residence for him and his small family. Think of all who will be employed in the construction and upkeep of the building, and think how now I don’t even have one maid, when so many need work.

The walls of the coach cabin of the 747 were decorated with delicate Indian floral patterns, and the air hostesses wore saris. I know that most who fly with Air India are Indian themselves, and this would not seem exotic to them, but it gladdened me to see evidence of a real culture within the plastic and sterile (and, honestly, run-down) world of air travel.

Happy, too, was I to see that the dinner choice was not between beef and chicken, but vegetarian and non-vegetarian! A satisfying curry I had, as did most others, as vegetarian was the popular choice.

In Paris, I boarded a high-speed train to Avignon and arrived in three hours. This is only a little longer than it would have taken in an airplane, even without considering all the time I’ve spent on the tarmac on recent flights, as lines of planes waited to take off (it was an hour yesterday). 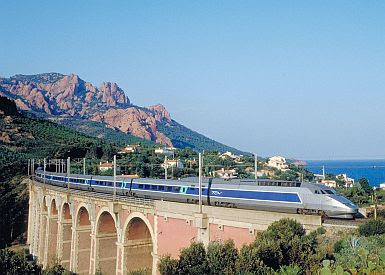 Trains are still the best way to travel, especially in France, home of the fastest trains in the west. Comfortable seats, quiet cabins, lounge cars, giant windows that let you see the beautiful, varied countryside. Trains always run on time (except for the New York subway, which I am convinced must be locked in a long war with giant tunnel rats, as there is no other excuse for the inconsistency of its scheduling).

And as trains can run on electricity, whether it comes from coal (as in America) or nuclear fission (as in France) or wind (as in duh!), they are an infinitely better choice than airplanes, which, until they make a light, powerful battery for jets (which, judging by the shameful battery time of this once-state-of-the-art PowerBook—three hours of word processing or one hour of video playback—isn’t going to be soon) airplanes will run on jet fuel. Did you know that an ordinary cross-country flight creates the same amount of carbon emissions—per person—as an SUV creates in a year of regular use? (Other facts learned from a newly environmentally-obsessed NPR: the methane released from cows and other animals as they chew warms the globe twenty times more than carbon—eat more vegetables!—and the tilling of soil releases carbon that had been locked in it for millennia—eat less vegetables!) 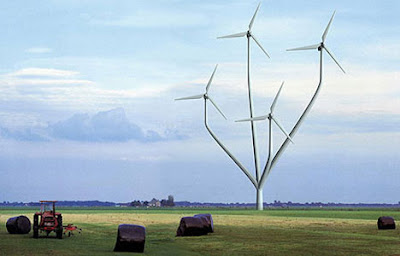 Imagine a network of friction-less maglev trains crossing an America dotted with windmills: comfortable, fast, and carbon neutral. Then remember that it is more important that we spend a trillion dollars on the occupation of Iraq, because there’s oil there. Remember, also, that two hurricane seasons later, New Orleans still doesn’t have proper levees.

Ah, back in France, and still America consumes me. I’m afraid the bleakness finally reached me on this last trip: there may be no salvation for America. The Asian century is upon us and it may be the best thing for us. Let America be stripped of its position at the top, and let its power and pride come down with it. All over the world, nations seem devoted to the betterment of their citizens, while America is being ridden by the executive branch of its government, whose power-grab is masked by a bigoted war of vengeance and a pervasive fear of turbaned bogeymen. The rich destroy the poor and the poor destroy the poorest, and the selfishness is marked not by a cry of I’ve got mine but I need to get mine, and that quest for the basic human rights of health and security and reward for work, well within reach of the richest nation on the planet but withheld for the purpose of the suppression of political power of the masses, whose discontent is unorganized and pacified by television and technology, is how they got us.

And when they look back at us, they’ll see a people whose political sophistication so devolved that the iPhone was elected president in a write-in landslide, and policy was decided on American Idol, just before the commercial break.

Coleen said…
i have always wanted to see a double decker plane, like on growing pains when jason delivered the baby. did you watch mos def on bill maher???
September 12, 2007 at 10:08 AM