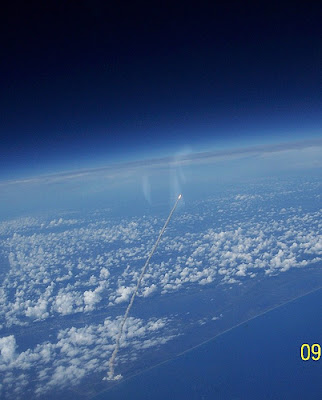 We celebrate fifty years of space exploration next month, the anniversary of the first manmade object to break free of the confines of the gravity and atmosphere of our home planet to reach outer space—or, at least, orbit above our planet. I say manmade, but I think it may be the first of any Earth object to find itself in outer space, unless there can be a case made for volcanic debris.

Sputnik, the first and still the most beautiful space vehicle, was launched by the Russians on October 4th, 1957. Having little other purpose than to orbit very quickly around the planet and beep for ham radio operators all over the world, the tiny satellite was symbolic of the superiority of the Soviet space program. Now, seen from the end of fifty years, it stands as the beginning steps of one of humanity’s greatest, most romantic endeavors. Someday, when our parents are long gone, and only we who are ignorant of the Cold War are left to teach, all that will be important will be that man first left his planet in 1957. 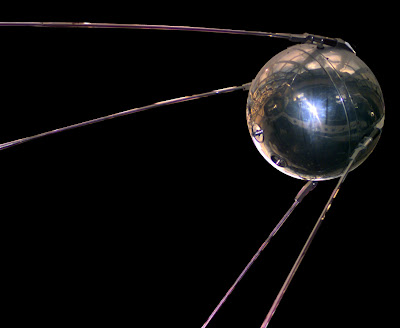 What followed Sputnik was a telescoping series of feats bigger and grander than any humans had ever undertaken, all progressing quickly and expending itself in a span of fifteen years. From Sputnik to Laika, the first Earth creature to die in space, to men in orbit and then men on the moon, it was a time that must have been very exciting for all humans, not only scientists and children and nationalists. 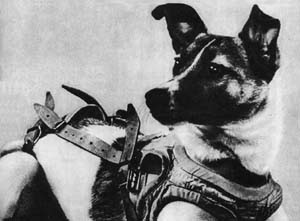 But of course it would be anticlimactic. The point wasn’t the moon, which was all rock and dust, or space, which was found to be appropriately—though unimaginatively—named. It was the challenge, and we were up for it. But when we had done it, there was nothing to do but to give it up.

For those of us living after the space age, the missions have become unromantic, unworthy of all but a brief mention in the newspaper. We only remember the failures. There’s not much to do up there, except study the effects of weightlessness and radiation on different organisms. Colonizing the moon or reaching Mars are cost-prohibitive and somewhat pointless. 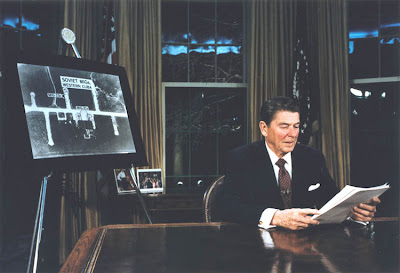 The truth is, space was always a military endeavor, whether we were racing the Soviets or planning weapons and surveillance. There was simply no other feasible reason to spend government dollars in putting people off-planet. Except for perhaps the prestige and luxury of being a nation with, of all things, a space program, when some don’t even have an infrastructure.

Which is not to say that I am against the space program. Since there exist almost no national programs for arts or culture in this age, NASA, by default, becomes my favorite agency to watch. I am a former boy, an explorer manqué, and still a someday astronaut (more on that later). And rather than an extravagance, I see NASA as one of the most vital arms of our government. The return on its investment, through new technologies, has been found to be threefold. Think where we would be had Sputnik and those satellites to follow never been designed. 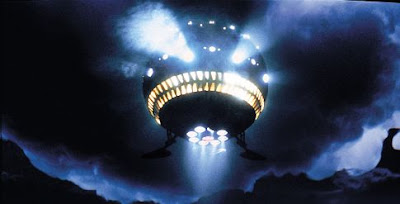 I have though, in my advanced age, become skeptical of my former flights of fancy. We will never meet a being from another planet, though I am sure some must exist. The same infinity that promises that we are not alone keeps us alone: the distance between suns is too far for anyone too travel, restricted as we all are by the speed of light. Consider infinity and then wonder at the chance that a self-sustaining spaceship that can travel near the speed of light would have either mapped out such a large part of the galaxy (or universe) to notice us and set a course to arrive at us centuries later, or that the same ship would find us by accident. And wonder whether we would ever do the same.

Also, now I am older and more aware of the needs here on Earth, I am more interested in gains made toward life here than out there. And I cannot think of anything we need out there that we do not have here. We will someday colonize the moon and Mars (and think of that moment, predicted to occur in the next fifteen years, that a human steps on the red planet). I doubt we will make much of these colonies in my time. I have seen no evidence that we can terraform one of these planets—that is, make an Earth-like atmosphere and environment. So, who but the most dedicated of us would ever live on a terrain so alien, so removed from anything familiar, for longer than a few months? Those on the moon would at least see the oceans of Earth. On Mars, Earth will be a blue speck in the sky. 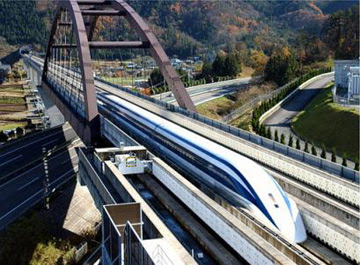 Think if we had a government agency like NASA, except its purpose was to make our lives on Earth better through science and technology. Think of my proposal in another post of cleaning the skies of the growing fleets of high-pollution airplanes and replacing them with wind-powered maglev trains crisscrossing the countryside, fast, clean, and comfortable. The technology is in its infancy; the trains may someday be as fast as jets. 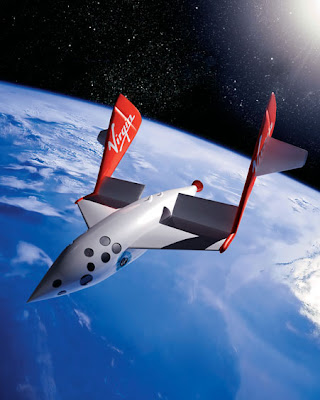 But we are in space, and our role there is expanding. We stand now, fifty years later, on the brink of a new space age, one pioneered not by America or Russia, but by the private sector. Space tourism is a new, fantastic industry, and it will get into full swing when Virgin Galactic (is there any company with a better name?) receives its fleet of upgraded SpaceShipOnes, the craft designed and built by a private company and the winner of the X-Prize, a contest to find such a craft to fly beyond our atmosphere into outer space. That it will be possible for me to fly to space in a few years I find astounding.

Space has opened up for everyone. Jeff Bezos, the billionaire founder of Amazon.com, is building a rocketship in Texas. PayPal’s founder, Elon Musk, is building his own rocketship. Companies are weighing the cost-benefit analysis of outer space mining. (If we are going to sully a planet for its minerals, let it be Mars or Venus or an asteroid, and not the only life-sustaining planet in the known galaxy.) Companies are considering their own stations on the moon, not patient to wait for the government to get there.

We have now billionaires who grew up in the excitement of the moon landing. Not content to conquer business here, they will direct themselves out there. It is all of our gain. I still cannot see our immediate role off-planet, at least with existing technologies, but perhaps I have forgotten how to think large. Cities on the moon and Mars would serve some purpose, if only that of getting us there and inspiring us to go further.
humanity science space

Coleen said…
who knew you were still interested in space travel? thanks for the knowledge

Reilly Owens said…
Let's give The Office a couple more episodes--although it was certainly nice to be back. They have such a great formula: throw together a bunch of really funny people and bounce around, joke to joke. I would have liked more Dwight, but that'll come.
September 29, 2007 at 5:49 PM