The Beating Of The Good Heart 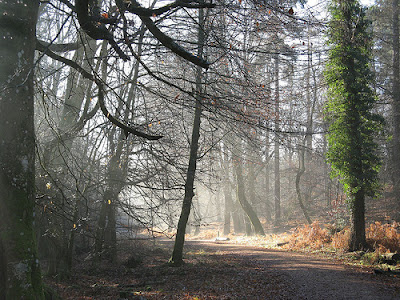 The lady opened the door and was the vision of prettiness. A lovely dress she wore and her brown hair was knotted up behind her. The sun was up to meet her and wash her in its yellow shine, but she was lost in the stranger’s black shadow. She saw him with round blue eyes that for a short minute were without fear or scorn. In a sweet voice, she greeted him and asked him his business.

Whatever the stranger said after that, and whatever he did, couldn’t be figured on, but Cusack knew the depravity of it and he saw the blood and heard the screams and he felt the terror in Fiona Hammond’s good heart.

He pushed forward on the road, in spite of his fatigue, his hunger, a racking cough, and still-damp breeches. What he should have been feeling now was triumph: that he’d escaped his murder, that he was ahead of his enemy. Instead he ran heavy-legged, bone-sogged, always behind. Every leaden stride seemed to put him further behind Winston, whose means provided him with everything that Cusack so mournfully lacked: rest, food, comfort, easy traveling, a horse. By God, a horse.

He would take one as soon as he saw it, rob it from pasture or barn, and ride full gallop, unheedful of shot or men or law or the health of the beast. He would ride it until the animal’s heart burst under him and it collapsed and he would take another one and kill it again until he was delivered to Fiona Hammond. The weight of Captain Hammond’s murder was heavy on Cusack’s heart, and it was now his debt to save the Captain’s wife. He was involved in this, a barbarous amusement mounted by a blackguard nobleman, and he was still unsure of his part. He had not become Winston’s opponent; at the most, he was a pawn who may yet be underestimated.

Fiona Hammond was in Bibury in Gloucestershire; Cusack knew that well enough. The Captain had spoken of his home as often and as fervently as he had spoken of his wife. The country and the woman were bound together in Cusack’s imagination so that each was part of the other, she some yellow maiden nestled like a flower in the green trees and hills. He learned her beauty secondhand from a man who had idealized it. Cusack knew her as a goddess, England herself, and life, and everything we must live and die for.

Hammond in Valencia: “Home again in a fortnight, and to my Fiona. I shall see her new again, as I always do, changed by time and the seasons, and something else: experience, maybe, which builds us up behind our eyes. Each time I return to her, she is more complex—there are many more parts at play in her thought and her love.

“But I stray: I mean that she is closer to whole, that her growth matches mine. Oh, she is my match, Anwell, as important to my survival as food and air. My heart wouldn’t beat without hers resounding. I say she is changed by the seasons; I mean it just as England is changed. What is unfamiliar only contrasts the familiar and strengthens it. Our bodies grow old—though hers at a slower clip—but our eternal spirit becomes more manifest. It is our animus, the specter of us, the living core of us. It takes love to see it. An old woman is always an old woman, unless you love her. Then she is neither old nor young, but infinite. I would pray that you find a love like mine, Anwell, so you may know your immortality.”

Cusack tramped slower now, afraid of overexerting himself and falling victim to some disease of exhaustion, apoplexy or heart attack. He was capable of it now he was such a fine and forlorn jackass. He might just collapse in the road and finish his part of the concern there and then. Already Captain Hammond tortured, dead, and disgraced, and the murderer escaped, and him running in the woods to catch a man on a horse.

And it wasn’t poor luck that did it, or that Winston was a more able man (though he was clever and willful). It was that Cusack had faced the devil and faltered. He had failed. His breathing and running were evidence of it. He had tried to be clever and win a fiendish game, when he should have only put his thumbs on that man’s throat.

But his duty to Fiona Hammond! To protect her and keep her safe, and to tell her of her husband’s unjust death, and his courage in facing it. Oh, Winston had him well. The ship burned in the Channel and he jogged down the road like the universe’s own laughingstock. He’d done neither wrong nor right, but only knew his failure at every stage.

A corrupt world, thought Cusack. That men like Winston should triumph. I’m not clever, but the Captain was, and where did he fall? No, the world is designed so bad men should win, that a good man’s crew should overtake him, and evil be let loose to prey on the innocent. I’m good—or I mean to be—and here I push to the limit my ability, and by all accounts I’m a sight wretched and droll.

His thoughts continued on this line perpetually, in a cycle that included visions of Winston bouncing in a carriage and jauntily stepping out to arrive at the Hammonds’ doorstep, and Fiona Hammond opening that door, and her inviting smile, and all the ways Winston would exploit her goodness, which became mixed up with every violence Cusack had ever witnessed and retained, so that the idyllic cottage became a charnel house which contained all the horrors of mankind, all practiced on Fiona Hammond, the Captain’s wife, Cusack’s charge, winter come to England and never go.