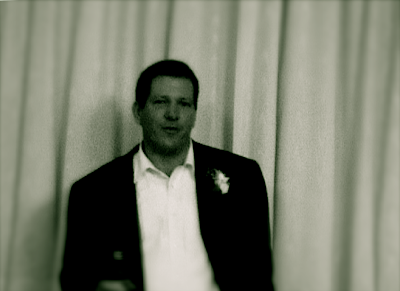 Let us broach the subject of my father and investigate him in small amounts. The danger shows even here, before the words have started flowing, as my brain becomes crowded with sentiments and remembrances and theories and emotions. There is so much to say.

Let this not be an obituary, because the man is only-half-lived. Fifty-three today and fifty-three these days is middle age—early middle age. I know men fall sooner than 106, but men like this?

He stands stooped in his garden and pulls flowering yellow squash from the vines. The basement is filled with paper bags of his tomatoes. He tells my mother he will be a vegan, but maybe she knows better and keeps cooking everything with a pile of sausage. Once he ate a live mussel from the cold Maine seawater and fell violently ill.

My mother tells me what he says to her in secret. To me he says my veganism is turning my bones to paper. He tells me how Bush is strengthening America, but he has voted for Ralph Nader in the last two elections. One morning he told me to enlist in the military and by dinnertime he said I should marry my Canadian sweetheart before the draft started.

He must be a madman, or a child, the way he talks. He is cockamamie and calculating. Only he has the ability to enrage me, like when we found ourselves on the same bus after his workday and my attendance of a peace rally. He declared for all around him his endorsement of ethnic cleansing. He didn’t believe it (how could he believe it?) but he said it to get a rise out of me. Sure, it worked.

He doesn’t believe in anything so much as contrariness, and he’ll say something just to beat you. I take some of that from him. I think all my siblings have it. We have his great sense of humor, which even my mother has adopted lately, but we also have his button-pushing contrariness, his small cruelties.

(I wonder if we need only a Katherine Hepburn to show us not as tormentors but gamesmen. But I fear, too, that we are better-matched with Elizabeth Taylor in Who’s Afraid of Virginia Woolf? In any case, let us thank the women we love for resisting what must be a very strong urge to put arsenic in our lentils.)

If he is half-child, then the other half is God. The years between our visits show me his age now, in the gray in his beard and the weathering of his skin. He looks like what he is, a descendent of Celtic & Saxon warriors. His is the face I read in Beowulf. He is still taller than me, still stronger. He still runs marathons.

His accomplishments have always been greater than mine. Any greatness in me belongs at least a little to him. He was father to all of us, all seven, and husband to my mother. He worked all his life, two, three jobs at once. He served his life up to his family above all else, and I never once saw a fit of depression or rage or anxiety. There was food for us, and a home, against harsh odds, and if we lacked anything, we didn’t notice, or were compensated with affection and fraternity.

If I believe myself a complicated person, then I must allow the same for my father. Not simply breadwinner, workingman, authority, father, but man. His history doesn’t belong to me, close as we are. I think the great lie is that we know our parents, whom we can’t even begin to know until now, as we grow and age and see life hard. There was much more to their lives than me, and it used to be that I was the only thing. My father had an entire life before me, and another one during. He has another life now.

There was a dinner a long time ago, when my family lived in Florida and we visited my father’s family in New York. There were the Owens brothers around a table—old hooligans trading tales. I heard stories that weren’t about me, brickbat rumbles and brushes with death. I disappeared from my father’s life, and my own. Mine may not have been the most important life in the history of the world. My father did it first, and differently, and he’s still doing it.

I continue to find out who my father is. Slowly his life is revealed. It hasn’t changed my opinion of him: moral, loyal, strong, and selfless. It has removed his godhood and shown me the man. That frustrating old fool tending his grapes this October morning has had it harder than I ever guessed, and bigger and faster and deeper than I ever realized. His story is large and worth telling. I hope someday I’ll know him enough to do that.

MUSTblogMEMORIES said…
The nut doesn't fall far from the tree. Reilly, I don't think you realize how much of dad you are. If dad wasn't married and childless, I think he would be running around a foreign country just like you.

Thanks for this post...I now know how cockamamie is spelled.

MUSTblogMEMORIES said…
by the way...what was dad's b-day present this year?

Reilly Owens said…
Tammy got someone a birthday present? Tell me another one!

Karen said…
The sisters seem to think that I like to argue for arguments sake- we really do grow up to be like our parents.
October 27, 2007 at 9:56 PM

Cathy said…
Hi Reilly,
What an interesting character your dad is and what a good son you are! Maybe some day I will have the privilege and honor to meet him. And, it is okay if the apple does not fall far from the tree. Enjoy your last few weeks in France, Cathy
October 28, 2007 at 12:38 PM

fht5v3h5wi said…
A 3D printing service greatest lends itself to a producing technique recognized as|often identified as} additive manufacturing, in which the meals is built up into three dimensions from Cooling Towels 2D layers. The method is particularly applicable to chocolate, sweets, pasta, pizza, and crackers. Nowadays, it's common uncommon} for colleges, public libraries, and universities to have an in-house 3D printing service.
January 29, 2023 at 1:12 AM