The Root Of Humor 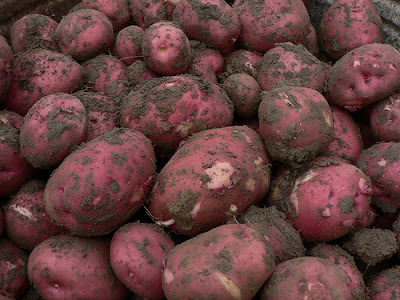 “Light a cigarette, Jean. Listen to me.”

“What is it?” Jean asked. He’d been in the process of lighting a cigarette. He gave Bernard a quizzical look and flared a bright match near his lips. He sucked in the smoke and let his shoulders drop a few inches. In a minute he would take off his jacket.

The thick flesh of Bernard’s hangdog jowls nearly quivered. He’d just shaved, Jean saw. Twice a day all his life and, presently, there was no wife. She left, or he kicked her out. That story wasn’t set in stone yet.

“I had a drink at Les Halles today,” Bernard began.
“Sure that wasn’t yesterday?” Jean chided.
“Shut up. Listen. You know Henri? He sells the potatoes?”
“I know Henri. On Bastille Day I get my blue, white, and red potatoes from him.”

“Shut up, jackass,” Bernard said. He paused then, and laughed, and remembered the year his wife made a potato salad that looked like the tricolor. They’d pissed her off by eating all of fraternité and not touching egalité.

Jean ordered and the barman put up two glasses of bourbon. They each took a swallow. Jean repositioned himself against the bar to face the door and Bernard. “What about Henri?” he asked.

Bernard chuckled. “Ho ho. Listen. He goes around early to all the farms. All the little farms around here to get the local stuff. He gets the other stuff, too, from the south, but he gets the local stuff because it’s better. Some of these places are just a few acres, but that’s okay for the potatoes. So he has a lot of these small farmers and sometimes they give him a crate of dirty potatoes they pulled up an hour before. They don’t wash it. That’s okay—he’ll do it.”

Bernard took another drink. “One place is this old woman. I think there’s an old man but he doesn’t get up anymore. She pulls up the potatoes and puts them in a crate near the house. Henri has to pick up the crate because she can’t do it. Too heavy. Dirty potatoes.

“Henri takes them to Les Halles and washes them in the sink in his stall. He’s selling yesterday’s potatoes and washing today’s. He gets to this woman’s crate and starts washing them. Some are really caked. Fresh from the ground. Beautiful. He finds one like a big ball of dried mud. He starts picking at it, runs it under the faucet.”

Bernard put his chin to his chest and laughed. He found his breath and said, “You know what this old woman dug up? Threw in with the potatoes? Goddamn grenade!”

“No!” said Jean. “From the war?”
“From the war! And still live!”
“Bullshit,” Jean said.
“The gendarmes had to come. They cleared out Les Halles for an hour. That son-of-a-bitch was cleaning it with a potato brush!” He was really bellowing now.
fiction France war