The Atavist Damns You All On His Blog 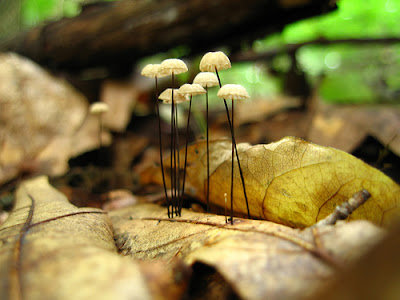 Now is the magic time.

Summer has exhausted the sun and the green things of the earth have swallowed up their abundance. Trees fat on plenty count another ring and bear down for the dormant season. They expend themselves on a last gasp, bright green leaves drooped with ants explode to red then gold and the wind shakes every living thing out. Every last sunbeam catches, and then the sun burns out before any earth thing has given up.

It’s the moon season coming. Furious winds blow out of the great earth and steal away each last dry and cracked leaf. They fall far and long in looping, swirling descents whose grace dwarf humanity’s attempts at beauty: no plastic art has eclipsed the complex, everyday miracle of motion in nature. Who has studied a painting for as long as they have a flame or the surf or the rustling of ten thousand leaves in a gentle breeze?

Black leaves line the banks of the river. The trees are stripped bare and shrunken. Moonlight falls splashing on every inch of the black earth. Things stir in the soil. All the flying things, the insects and the birds, have decamped or burrowed in. The air is empty, except when the wind blows mad and twisting and picks up the deposited earth and the spindly branches of naked trees are dressed again in a shaking jacket of lost twigs and leaves. It’s the haunted time.

What was swollen in the summer is parched now. The summer earth was covered in pulsing veins of invasive humanity, greedy as the trees for sun-blessed life. Now they are burrowed in like the insects. Whole parcels of earth go vacant for days or weeks or entire seasons. Now is the old time. Shy spirits walk in ancient forests, raised by the silence and the starlight.

Now is the magic time, the old time, the season of communion. These false lives, the path of a hundred centuries diverted in the last by commerce and invention—not progress, convenience—fall low before a higher altar. The wind blows the forest in and the rain beats down, patiently, everything. Now is our time, a fraction of real time.

But here the world persists, now in the old season of communion, the devil world, relentless, diminishing our lives and punishing our rupture. The sun abates and the trees steel up for the whipping season, when the world will thrash us. Our hot engines spin faster, louder, hotter, dirtier to seal us up from the world’s drubbing.

Time was, in the magic time, they moved slow feet in the layered leaves, among the moon-fed toadstools, moss, and lichen, moon-stalked, starlit, wind-spun, wind-chilled, and the world was vast. The world was greater than us. It was the leaves and the earth, but it was the moon, too, and the stars. We knew the greatness and there was a place for us in it. The little gods danced in fires and made the barley high. Winter came in on the backs of stags and sometimes mischievous spirits kept the wood from burning or the hens from laying. There were great gods, too, though they had no names, and they stole the breath from the mouths of children. There was a price for living in the world.

Gods don’t change, and they don’t die, and they don’t go away. These trees that shake above us and drop their leaves on ancient ground are part of an old world. The winds that push us carry all the old world, all our dead in dust. In the lonely parts of the world, in this magic time, I can hear the old gods running. We can’t write the story of the world; it writes us.
atavism nature paganism