Movie Journal #3: Into The Wild 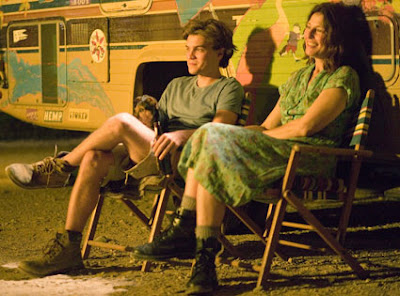 Sean Penn’s film of Jon Krakeur’s splendid book about college graduate Chris McCandless’s admirable and naïve liberation from society and flight into the American wilderness must be credited for treating its audience to an expansive panorama, full of sights and people too seldom seen in the cinema. The movie is at times breathtaking in its depiction of America and its malcontents. It’s only too bad that these highs are so rarely hit in this drifting, overlong film.

Indeed, the book fared better at inspiring wonder, such as when the author visits a tunneled rock formation in the desert, or follows McCandless down the Colorado River into Mexico. In the movie, that wonder at natural beauty is replaced by an awe of McCandless’s spirit, and an investigation into his motives. The book was interested in McCandless, but more as a symbol of a common longing and youthful gusto.

The movie wastes its time on Chris’s family, and bores us with one of those gratingly soft-spoken, semi-poetic narrations by a female actor that have marred other recent films, such as Cold Mountain and Lord Of The Rings. It seems Penn, adventurous here if a little unfocused, was inspired by his work with Terrence Malick on The Thin Red Line. Malick is a master of this kind of film, the drifting, languorous, and poetic exploration of man’s soul and its relationship with nature. Penn has never played it safe, as an actor and as a director, but he doesn’t have the artistry to pull off something so ambitiously poetic.

It is the mark of a mediocre film that in viewing it my thoughts drift to other films of a common theme, and I begin to compare them (and more than likely I begin to long to see the other one, as if my appetite has been whetted). Into The Wild is a lesser work of art than the Malick films, and though it shares the same spirit, it is a pale cousin to Kerouac and Jack London.

It might have been stronger if character here took a back seat to story and scenery. Or better yet, if McCandless’s story involved more of the characters played by Catherine Keener and Brian Dierker, and Hal Holbrook, who are the movie’s true revelations and most sublime warm places. But McCandless forsook society and went into the wild. His tale is the lesser for it.
film film review Movie Journal

Anonymous said…
McCandless's story is tragic, but then so many people have benefited from hearing it... a couple of years of hitchhiking led to his story challenging thousands (millions?) of people to reexamine their lives
May 1, 2008 at 1:58 PM