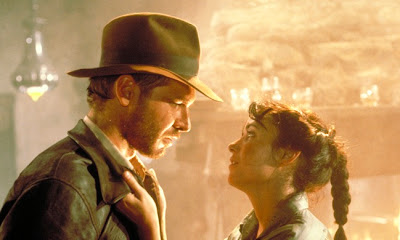 Raiders Of The Lost Ark

What do we do with these indelible masterpieces of our youth? Every scene lays just where it should, every line anticipated and delivered as if it were movie Scripture. Half the experience of watching the movie is remembering it, which leaves little room for freshness, and no surprises. Raiders Of The Lost Ark prospers on surprises.

It is difficult, too, that Raiders, inspired concept that it is, is rather simplistic. It is a concept executed. It has charms, but not human ones. It is a bit cold, an exercise totally in its genre, and forgets that Spielberg’s best touch is his lightest, those small human moments that balance and eventually outshine the big and the breathtaking. From Jaws, I remember most the three men around a table, trading tales, and from Close Encounters, I remember Richard Dreyfuss trying to convince his sons that seeing Pinocchio is better than miniature golf. (The reason Shyamalan is so good is because he cops this side of Spielberg and not the other, spectacular one.)

There are few such moments in Raiders. But for Karen Allen’s ebullient turn, the film is all chess pieces, archetypes moving quickly from place to place, scene to scene, to fit in as much as possible, all those B-movie tropes, all played with wit, and to never slow enough to stall.

What elevates the film is Spielberg’s masterful, playful technical artistry, and the expanse of its playground. Here is Spielberg still young, still unwise of the full world but confident enough to pretend, not yet second-guessing himself. He makes high art out of pulp, and delivers a pure cinematic experience. That it is sometimes imperfect, in its editing and John Williams’s relentless score, for instance, is forgivable. The film lives in both camps, high and low, and rests beyond any real critique. Isn’t this fun? it asks, as if that were all a movie should be, or could be.
film film review Movie Journal