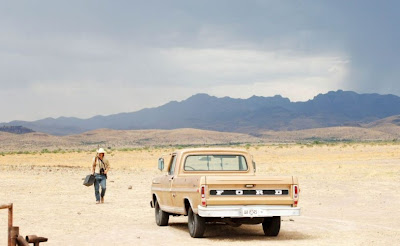 No Country For Old Men

Here is a flawless film, perfectly executed. It is philosophical without being cold, peopled as it is by real human characters, all caught up in a microcosmic game of ambition and expectation versus fate. It is a technical masterpiece, as was Hitchcock’s Vertigo, but like that film it has a soul that runs deeper than its genre or even its medium can contain. It is a great film.

Its strength is in the way it plays by the rules of the crime thriller, but also explodes the genre whenever it can. Here is a drug deal gone wrong and the innocent everyman who finds himself with a satchel full of cash. Here is the sociopathic killer on his trail, and the old sheriff chasing them both.

But look at the care put into Josh Brolin’s everyman character, the way he fills the role, and how observant the filmmakers are in creating a real person. His actions, his motivations, all ring true, surprising as they sometimes are. (I especially love when Brolin, unable to sleep, mutters, “All right,” and hops out of bed, because something didn’t sit right with him, and nothing could be done until it was fixed. I love also how this one choice, one of the film’s only presentations of compassion, condemns its characters.)

In noting traits of human nature overlooked or neglected by other storytellers and presenting them straight, with no exposition or ceremony, the characters come alive with simple strokes, short punches of dialogue (as in the sweet, terrific interchanges between Brolin and Kelly Macdonald), and long, silent stretches of action. And because the movie doesn’t explain everything that happens, the audience is involved more deeply in its dialogue and philosophical investigation.

Part of that investigation involves Javier Bardem’s character of Anton Chigurh, a remorseless, arbitrary killing machine who walks through the film, closer and closer on Brolin’s heels, murdering nigh everyone in his way. He’s like the Grim Reaper or the hand of fate, and has had to do a lot of the symbolic heavy lifting as to the Coen brothers’ intent in making the film. It’s not important whether he’s real or a ghost, a psychopath or Fate itself. As he says, he got here the same way the coin did, referring to the heads-or-tails chance he gives some of his victims.

Chigurh represents the meanness and inexplicability of fate. Our deaths seldom have any meaning in relation to our lives. Pianos sometimes fall out of the sky to crush us, and it adds nothing but awkward punctuation to our story. I like to imagine Chigurh as a person power-mad with his godliness, that each murder is an addition to his strength and a lesson to the victim. One of the movie’s best jokes is that in the end, even he is interrupted by the unforeseen hand of fate (and note how Chigurh’s own hand becomes disabled).

The very soul of the movie is Tommy Lee Jones’s character, who acts as narrator and Greek chorus to the rest of the story. He’s old, and life as he’s seen it has lost its charm. He can’t understand men anymore and hasn’t the energy to try. His opening narration sets the tone for the film, that we should watch the events unfold, but keep in mind that this is nothing normal or desired by any right-thinking person. Poignant, too, is when the movie points out that even he is wrong, the world hasn’t changed; only he has. And the closing scene, a short description of a dream the character had, touches just the right notes of despair and hope. It hasn’t escaped my mind since I saw it.
film film review Movie Journal

Coleen said…
It hasn't escaped your mind because you just watched it for the second time. You didn't mention the charming Woody H. I liked when Brolin got up from bed too, but what was the joke at the end?
March 28, 2008 at 9:43 PM

Reilly Owens said…
The joke was that Chigurh, who represented the unexpected cruelty of fate, was interrupted by something as unexpected and banal as an automobile accident in the suburbs. The unstoppable killing machine was brought low by the mocking hand of fate.
March 29, 2008 at 2:27 AM

Anonymous said…
Where are you?. No excuses about work cause you took the job instead of managing for the flexability of writing... Love ,needing my fix...
April 24, 2008 at 3:07 AM