Movie Journal #5: Indiana Jones And The Temple Of Doom 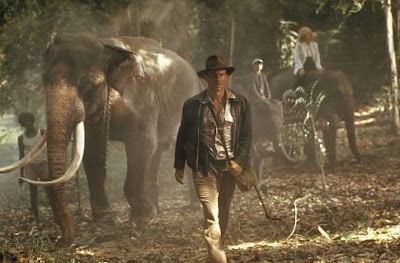 Indiana Jones And The Temple Of Doom

Now I see it, the difference. Where Raiders Of The Lost Ark was elegant, a mature homage and update of classic Saturday serials, told with wit and an eye for spectacle, awe, and myth, its sequel is merely that: a sequel, another breed altogether. It builds on what is suspected to have worked the last time around, and rather than a celebration of something beloved, it means to explode what came before. It wants you to forget the last go around, and does so mainly by turning up the volume.

Temple Of Doom is loud and graceless, a juvenile gross-out with little of the sense of history or cleverness of its predecessor. It seems to have been made by different people, except that it is again masterfully directed by Steven Spielberg, whose eye for composition is nearly matchless in all of cinema. It’s only that Spielberg lost himself in the whiz-bangery this time, and used character to serve the situation, rather than the other way around.

The most jarring insult is that the previously archetypal and revered Jones character is made to do things that go against the grain of what we know of him. He was an adult before, a man with a Peter Pan-like streak of mischievousness and cruelty, but in the cartoon world he’s made to inhabit this time, he comes off sometimes as a buffoon, or at least the straight man in a camp of buffoons, and it’s hard to believe he would tolerate that for as long as he does.

Symbolic of the movie’s failings is Kate Capshaw’s character Willie Scott, one of the most annoying and abrasive of all female performances and certainly not akin to Katherine Hepburn in The African Queen. Capshaw herself is not terrible—she’s a good sport—but the character is so two-dimensional and irritating, one can’t believe the cold Dr. Jones wouldn’t have just left her behind in Shanghai at the start of the movie, after convincingly (to the movie’s dumb villains, at least) threatening to kill her. Thankfully, this movie is a prequel to Raiders, and he has Karen Allen to look forward to.

Taken on its own terms, the movie is admittedly successful. It’s funny—I’m a fan of Short Round—and exciting, and moves quite breezily through all its set pieces. And one of those sequences, the heart-stopping mine car chase, is one of the greatest ever constructed. And there it is. That its ambitions rest lower than its predecessor's, and that it betrays its character a little, must be forgiven. It’s still Spielberg, after all.
film film review Movie Journal