On Wings To Paradise 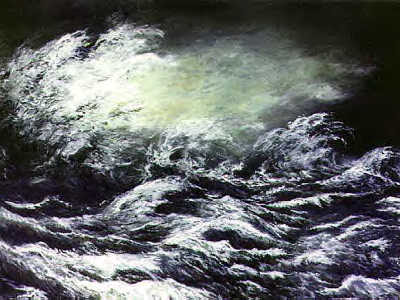 The Salted Orchard Part I

The terror hadn’t come yet, but it was near, as close as the brackish water that collided in a violent turmoil of waves beneath him, sea spray and spittle accumulating to leave him perpetually doused, and sometimes a lawless column of water exploded from the sea to thrash him against the hull. He could not see his hands but knew they were burned bleeding and raw at the wrists, and the fingers must be dead and black. The knots did not slip but grew tighter with each new violence. His left arm was fallen out of the shoulder. His final hope was that his body would let go the stubborn binds of tendon and muscle that kept him connected to his arms and hands, and he would drop quickly, quietly, heavily down into the sea, the deep, the black night of his last wretched day.

When the terror came, he would not even have hope. His mind would be lost, shattered, white hot and empty. His body would scream and flail against the ship, and they would watch on deck, laughing, and recording for God, history, and his family his last moments on Earth as a man. They would say he was more like a fish, small, white, and naked, flopping in the briny wind; or that he was as an infant, bloody and screaming, panicked at the sight of the world.

He staved off terror and thought of such things as God, history, and his family. There were no thoughts of escape or deliverance. He had exhausted those early. He had tried to pull himself up, to invite quick murder, but his feet slid on slippery planking; his arms, outstretched by two ropes in a near mockery of the Savior, could not raise him up. When he still felt his thumbs, he tried to saw through the rope with his nail. Had he two days, he might have done it. When it came that he clenched his fists and did not feel them close, the hope of escape perished.

Nor too was there pain. It was all over: he was bruised and bloodied, stretched and cracked and broken in so much of his body, it was all discomfort everywhere. Perhaps the acceptance of the pain and the resignation to his fate had dulled the agony to numbness. It no longer seared his brain.

He had found a terrible peace at the end. He did not beg for his life. He did not struggle once his death was sure. He resisted the terror and wondered how long before death. What kills a man, he thought. Christ died in three hours on the crucifix. His strained, broken body only quit. They have not defeated me, but my body will betray me.

There are other deaths, he thought, worse than this. I am awake. My spirit is sound, my mind whole. The ocean assaults me and I persist. The ice chill and hard slap of each wave on my chest revives me: I will die alive. The battering of my body speeds me to God. I will perish with the horizon before me and my enemy behind me. I will leave this life with the thought of my Fiona on my brain.

His pale, salt-scabbed form hung corpse-like against the starboard-side hull of the Good Hope. The gulls that came were bold. He did not stink yet; the sea washed him clean. The gulls wheeled in the air around the sails, then fell from the sky to hover before his face. He closed tight his mouth and eyes and twisted his head from side to side. He kicked his feet out at them. They drew back cautious, and it went this way until his strength waned and one gull, hungry and fearless, dropped in close and in an instant, in a blast of wind and stench and the soft brush of feathers, his eye was snatched out. It was only another minute until he lost the other one. There was quickly a frenzy, and the pain was restored to him.

His death came without peace or thought of God, history, or his Fiona. He thought only of the man who stood high above him, whose hard, fiendish laughter he could not hear but felt in every beak in every part of him, and if he still had a tongue, his last breath would have been a curse on James Winston.

Courtney C said…
I've waited a long time for you to engage us in some fiction.