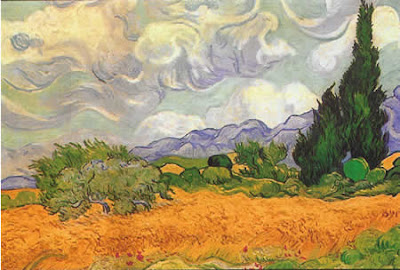 The beautiful spring weather has driven me out of my apartment and, for the first time since coming to France at the start of winter, I am able to stay outside for longer than it takes to shop. I find myself, of course, at the duck pond, a bustling hub of activity, for even if the children are in school and the tourists are ambling around town, wondering what there is to do while the French are at lunch and all the shops are closed, there are the reliable, never-changing mallards, a comfort the world over, surely a model of transplantable domestic solace followed by McDonald’s and Starbucks. 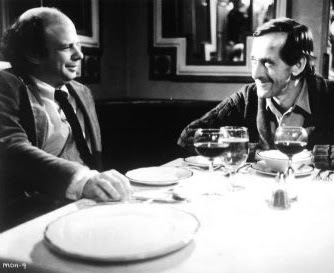 (I say that the tourists amble aimlessly at lunchtime because Brits and Americans cannot get into the French habit of eating for two hours, which demands some improbable behavior. I have seen Frenchmen converse over full plates of food for ten or fifteen minutes without ever showing any sign that they know the food has been delivered to them. I have fidgeted impatiently, waiting for each next course to arrive, while the couple at the next table struck up fresh cigarettes to celebrate the rapid cooling of their main courses.)

The ducks are a model, too, of idleness, and not a little ostentation. As I sit on a bench in the dusty gravel—because I think grass does not grow naturally in this part of France and all public spaces are re-bedded with fresh dust each spring—the ducks are buoyant in their lazing, lazy in their buoyancy. They paddle, wade, and drift from dawn to dusk, and do no hunting or foraging for their meals, because we humans take great pleasure in throwing food right into their mouths. It is fitting that Avignon’s duck pond is in the park of the Palace of the Popes; these ducks seem the reincarnations of the pontiffs. 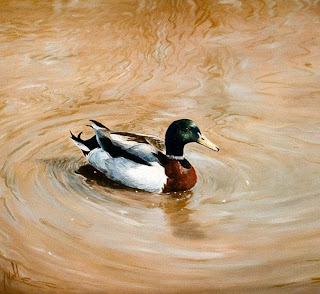 There is an unfair hierarchy among birds, or perhaps a new unnatural order of things. It is somewhat Darwinian: survival of the cutest. The birds we humans designate the prettiest get free lunches. The ducks are the lounging Eloi at the riverbank, blissfully entitled. If ducks ever fall out of fashion with humans, they may starve. What the ducks are too full to eat falls to the pigeons, invisible Morlocks scrambling about for crumbs. But what of the crow, who swoops in on the pigeons and sends them scattering? He must have a mean reputation, for though he is often less big than the largest pigeons, I have seen ten pigeons stand aside for one mad-eyed crow. I have also seen crows fighting over a dirty napkin even the pigeons have shunned.

But I have seen natural selection among the ducks. I have a new pastime: duck racing. A little girl threw some piece of food into the water—it must have been the end of a rubbery supermarket baguette. It was scooped up by a duck, but it was too large to be swallowed, too unnatural to fall apart in the water. This duck held on to it and the others gave chase. For a full five minutes, there were twenty ducks swimming hard laps in the pond after the one with the bread, who zigged, zagged, and dunked with the quixotic aim of swallowing the bread before dropping dead of a heart attack. If a person can find greyhound racing exciting, I think the anarchic sport of duck racing can be given a little respect. I don’t know who ended up with the meal, but all fell asleep soon after.

I have seen more reprehensible behavior among the mallards, and I am fully soured on them. In the space of an hour, I witnessed two rapes. I do not exaggerate; it is acknowledged by naturalists. What I thought was a bit of odd, bullying behavior by one duck turned out to be a sexual ritual that even National Geographic would not publicize. 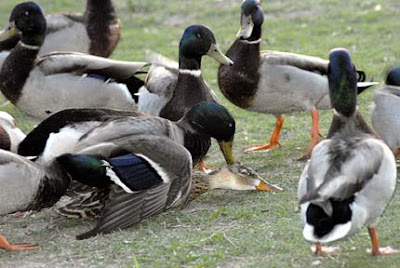 In the water, the male chased the female, who gave rape flight, and having caught her, mounted her and forced himself upon her. All the time, he clutched the back of her head with his bill and kept her nearly fully submerged. She popped up occasionally for air, and, no mistake, she endeavored to flee.

The male was helped by other males who pecked at the female’s head, to subdue her, I suppose. (In other cases not witnessed by me, the other males take turns with the female.) In a minute, it was over. She stood out of the water, shaking her tail feathers and dunking her head back in the water, perhaps to dull the pain. After that, she hid in the shrubbery and he went back to wading. What is most disheartening is that the male will force himself on a female even if she carries fertilized eggs within her. It was too much for me to watch even once. How many times must one female endure it in her lifetime? It has given new power to the rape of Leda by the swan, which I always thought was a bit silly. 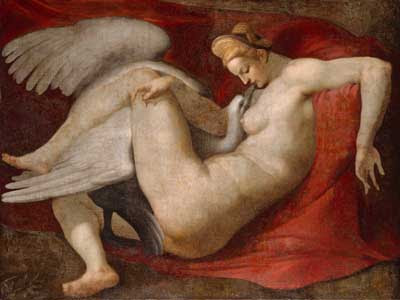 And if that has not convinced you of the mallard’s aberrant behavior, note that 13% of mallards are homosexual, which, while not morally or even naturally wrong, demonstrates a sex drive not born of procreation. They will rape other males and there is even one case of a homosexual necrophiliac duck. No wonder the ducks were the maddest and most violent of the Disney and Warner Brothers characters.

How am I to feel about this form of mating in nature? The female clearly is trying to escape the assault. Is it our duty to fix the ducks and make them respect each other? How have we solved this issue in our own society? Oh…

Well, perhaps the ducks shouldn’t be spending so much time around us.
animals France The Idler