I am at the duck pond again, and a large black dog has just passed me. It wears a strand of baby pacifiers on its collar, the way crocodile hunters wear necklaces made of teeth. 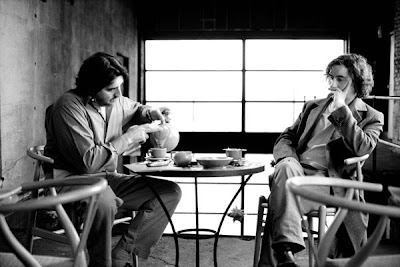 We have no Starbucks here in Avignon, much to Apollonia’s unfailing chagrin. She was one of those who was glad that there were two Starbucks in Astor Place in Manhattan, if only to give the appearance to their employees that she had a handle on her soy mocha addiction, visiting each one alternately throughout the day.

I have a certain appreciation for Starbucks, though I only visited once. On a trip to Seattle when I was fifteen, there was a lot of talk about who had the better coffee: Starbucks or Seattle’s Best Coffee. When I had the opportunity, I tried a frozen coffee at Starbucks. It was good, but more expensive and less satisfying than a banana milkshake at a nearby hamburger shack, which has been my attitude since.

I like Starbucks for its calculated coffeehouse-ness. They do their best to provide a comfortable environment for the idle. It is clean and well-decorated, and pretentious enough to make you feel sophisticated, unlike McDonald’s, all yellow plastic and Formica (excepting of course those extravagant sites in parts of Manhattan, like the Wall Street McDonald’s, which features live music on a grand piano). 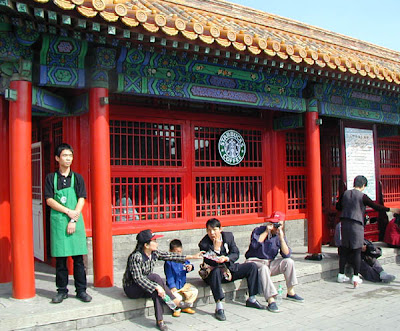 Of course, Starbucks is one of those evils of the modern age, the competition-killing, market-driving, soulless corporate behemoth. If they have not yet conquered France, we have our own example of the mold: Banette.

Before coming to France, I was not much experienced in fresh bread, having been reared on the sliced sponge cake that stands as the staff of life in America’s grocers. But I am addicted now, and growing fat on baguettes, pains de campagne, 6-cereal bread, and small loaves flavored with apples, nuts, and figs. I think I expand while the French stay thin because I have not adopted the full French diet of bread, wine, and cigarettes, and the occasional delicacy I call strangemeat, which is sometimes snail, sometimes head of calf, sometimes a novel sea thing barely defined as meat, which looks no better than the dissected starfish I once presented to my middle school science teacher. 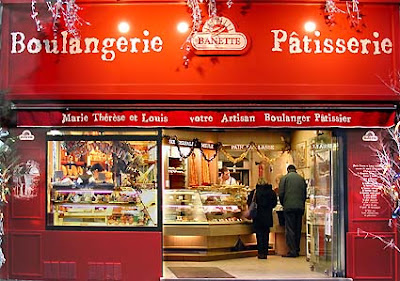 We have three Banettes in our modest town center, and ten times as many boulangers trying to compete with Banette’s model of cheap frozen dough baked quickly—imagine the loaves made by Subway. Unfortunately, Banette has flourished and nearly all boulangers have committed themselves to the bottom line, and the quality of fresh bread in France has decreased considerably in the past few years.

It is all better than American bread, so I was surprised to learn I have arrived at a poor moment in France’s rich history. Apollonia and I are on a quest to find a classic French baker, one committed to fresh dough made daily with the best ingredients, so that we may know the flavor that once inspired the peasants to kill their king. 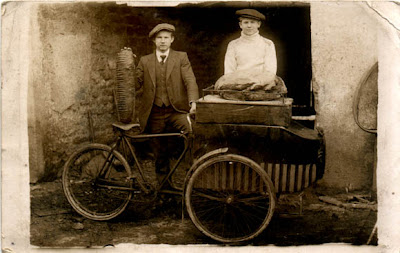 How much do the French love bread? To quell the revolution, bread was subsidized so that all could afford it. Nowadays, French law dictates that all bakeries must offer a loaf made from the three basic ingredients—flour, yeast, and salt—at a standardized price. Also, by law, there must be a bakery open each day of the week. Shops traditionally close on Sunday, so the town’s bakers must decide who will stay open.

Apollonia and I visited a boulangerie and saw that the young daughter of the baker carried around a doll made out of bread. 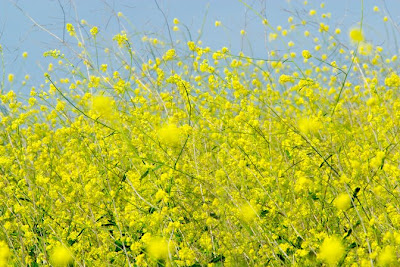 I could not file this without making mention of my new favorite thing in all the world: Gordon Ramsay’s Mustard Mash.

It is the first Ramsay recipe I have tried, in spite of my new and impartial love for all things Gordon, including the American Hell’s Kitchen, which is nowhere near as good as his British shows and a poor introduction to the man.

Mustard Mash is an entirely new flavor in the world of mashed potatoes, an arena usually dominated by garlic and sometimes moderated with the addition of corn kernels or fennel seeds. I have adapted it for vegan cooking, which would probably annoy Ramsay to no end.

Peel the potatoes and cut them into large, even-sized chunks. Cook in boiling salted water for 12-15 minutes until tender. Drain well, then return to the pan and dry out for 1-2 minutes over a medium heat. Mash the potatoes, preferably using a potato ricer back into the pan. For a very smooth result, push the mashed potato through a fine sieve.
Heat the soy milk and slowly stir into the mashed potato. Season well. Cook gently for 5 minutes, then gradually beat in the vegan butter, a cube at a time. Finally stir in the mustards and season with salt and pepper to taste. Serve warm.
bread cooking France recipe The Idler

Cathy said…
They are closing the Starbucks in the Forbidden Palace in Beijing because the Olympics are coming and they do not want the world to know that they have succumbed to USA style consumerism. It is quite a controversial decision, but fortunately, or unfortunately, depending on your addiction level, you do not argue with the leaders in China when they decide to do something.
April 9, 2007 at 12:33 PM

Reilly Owens said…
I only recently learned of the Forbidden Starbucks. It's a striking image, like the one of the first McDonald's in Russia. It's bad enough to finally get it together enough to visit a foreign country and find yourself surrounded by your countrymen. But what part of me finds adventure in discovering a place already claimed by Starbucks? And what's worse is the rest of the world gets the worst of American culture. I have yet to see a southern cookin' (soul food) restaurant in all of France.
April 9, 2007 at 1:20 PM

River Cougar said…
Ive heard that Seattles Best and Starbucks have merged. Peets is working its way into the mix.

Woody and I have the argument with someone every week. While we were living in WA, we learned to live for espresso. We couldnt go to town wihtout buying one from a different mom and pop stand every week. Rating them each time. Woody likes a shot of raspberry in his mocha. It took a few bad mochas before he realized that Starbucks is the only consistent shop around. He'd rather go without the raspberry than to have it imbalanced.

Starbucks may be a large corporation but they are one of the closest to beign a model multinational corp. Raising bars that they arent FORCED to raise. Health insurance for employees, a good stock of fair trade coffees, community charities and outreach programs, and damned good coffee.

There are a lot of things that bug me about California, but one of my biggest issues is the lack of espresso shops (other than starbucks in brand new strip malls). We are forced to go to starbucks out here and there not even as common as they should be. Woody had to buy me an espresso machine for xmas to help us with our Cali problem.

I was speaking to some english customers of mine the other day about how they love starbucks because of the consistency of quality. you always know what you'll get and fortunuately it's good.
April 25, 2007 at 11:36 PM