Spring In A Small Town 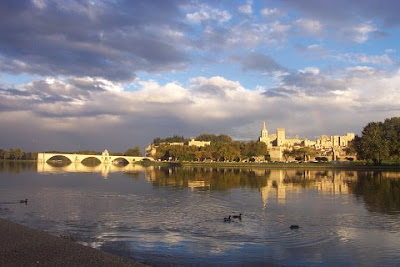 Easter marks the start of tourist season in the south of France, though the French don’t know it. Sunday and Monday are holidays, and our town has all but closed its gates. These two days I have watched countless tourists roam the streets, looking for something to do, which I suppose in tourist terms means a place to shop.

The cafés and restaurants are open (for lunch and dinner, anyway, although I see now many cafés are staying open all day long), but we can’t expect everyone to be on a culinary tour of Provençe. Most tourists want a piece of the action, that French something they heard about, whatever that is. In my case, I suppose it was the French lifestyle, which I interpret as placing importance on enjoying life at a slower pace, with good food, close family, and friends, and all lubricated with cheap good wine and plenty of sunshine. 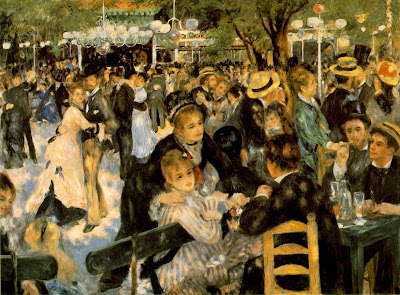 It is these virtues that motivate merchants to close their shops on what may well be their busiest days. After all, everyone deserves a day of rest, even bakers and grocers, and why not all on the same day? I think many of the people I see out with their families today are those very laborers. Those with families far outnumber every other stroller, and the atmosphere is one of pure, familial, non-consumerist amusement. Avignon on Sundays resembles my New York vision of Utopia.

On Saturday, we were inspired with the same wanderlust, so we took a day trip to the town of Uzès, an hour’s drive away, in the Languedoc region. It was recommended by our chocolatier, a good friend of mine—he doesn’t mind my pidgin French, and I come away from him always with the satisfaction that I have connected with another human; also, he gives me free chocolate. 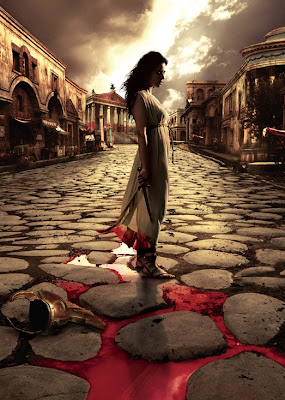 Uzès is a former Roman outpost; the south of France is full of them. The name Provençe comes from the Romans: it was a province of the Empire. The Romans have taken on a mythic quality in my life. I am at that age when history has proven to be more exciting and more useful than current affairs, and I spend long hours in studying up on the world that was before me.

I like the brief glimpses France has given me of the great Roman Empire. Avignon has only a few remnants of its former tenants: there is a fenced-off pile of bricks on a street corner that is all that is left of a stadium. But it is enough to give me a charge, a feeling that the city was populated once with a mightier people, and we walk now in the shadow of their glory. Their modes are outdated in our (mostly) gentler world, but their ambition, vigor, and accomplishment are undeniable.

Uzès played an important role for the Romans: it was the source of fresh water for the large city of Nimes, fifty kilometers to the south. Water was delivered to Nimes via an aqueduct, one of the great feats of the ancient world, a high stone channel that gradually declined, using gravity to send the water over the great distance. Little of the aqueduct survives today, but what is there, the Pont du Gard, is as spectacular a sight as one is likely to ever see. 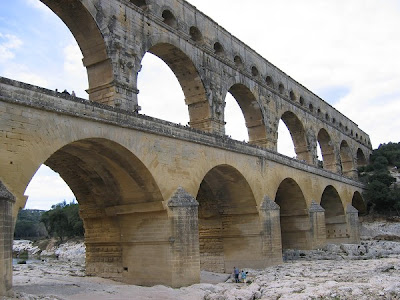 We have saved our visit to the aqueduct, a short distance from Uzès, for another day. It was Saturday, and Uzès has a famous market. We were happy to see our bus dropped us off right in the middle of the marketplace, which saved us from trying to find our way with a useless Google map or—heaven help us—having to ask for directions. In learning French, I have become hung up on pronunciation, or more exactly, on producing phlegmatic rolling noises with my uvula, which is necessary to making the French understand you, as, unfortunately, there is a difference in the pronunciation of toi and trois, audible only to Francophones. In purchasing chocolate once, I pointed at a praline and said trois, and was surprised to see the chocolatier take only one, and for himself.

Now I learn no vocabulary or grammar, but walk around all the time making this death rattle. And Apollonia, love her, may be too educated in French. She speaks quickly and blindly, with one of those accents that owes too much to her language school’s practice of hiring instructors who may know what to speak, but not how to speak. She sounds more American in her French than she does in her English. And she never notices that these French have misinterpreted everything she has said. She then gets upset that they have let their language skills degrade so far that they can’t understand proper French. 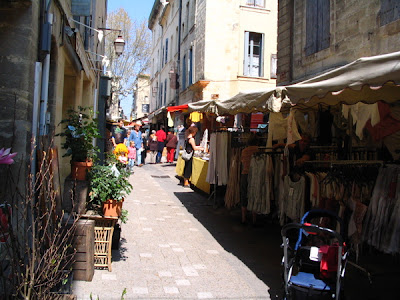 I say that we were glad to be dropped off at the market, but we soon found it could not have been otherwise. The famous market of Uzès snakes through almost the entire town. In the esplanade, in the regular marketplace, through the main streets, and the small streets in between, the pavement is overrun with tables and stalls. And where there is not a market stall, there is a brick-and-mortar shop or a sidewalk café.

It is a terrific atmosphere, with people milling about, the sun shining, and waiters and farmers dashing by. The stalls offered the typical fare: fresh produce, regional specialties, Provençal pottery and décor, and some of the tawdry merchandise that cheapens all markets: clothing and shoes that were more likely to have been made in Asia than around here. But the size of the market made it worth visiting. It offered more of all that stuff, and therefore more variety. 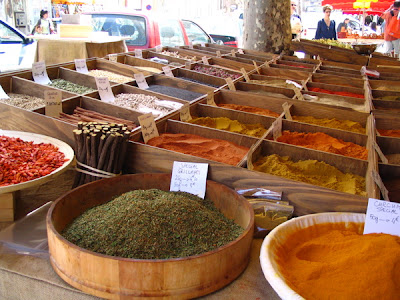 Apollonia found the medicinal herbs she has been disappointed not to have found in homeopathic, earthbound Provençe and I found more of my favorite novelty: foodstuffs unappetizingly flavored with local herbs, which always surprise me in their perfection. Jams of peaches & thyme and plums & rosemary now occupy pantry space with rosemary chocolate and chocolate-covered olives.

It was a wonderful day, if a short one. We saw a little more of the town, including a beautiful Roman tower and a medieval herb garden. We had drinks at a café, where I ordered a lemonade and was served a lemon soda called Pschittt!, which I liked, but only in print; I could not order it by name.

We had sandwiches and watched the old men play bocce and rooted for the man most distinguished in his dress and the lively woman come to drag her man home for dinner. Then we were on a bus and home ourselves.
France The Adventurer travel

MUSTblogMEMORIES said…
Sounds like someone's a little jealous of "A"'s ability to communicate with the locals.
April 15, 2007 at 4:19 AM