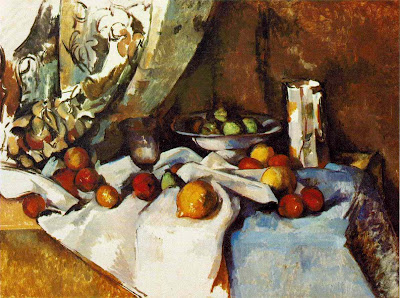 There is a kind of shop here called a fruitier. Or rather a shop that is run by a person with that title. A fruitier’s shop deals mainly in fresh produce, but they also sell local and imported specialty items: jars of confitures (fruit preserves), wines, olive oils, meats.

What marks a fruitier is his commitment to his occupation. He can tell you where each piece of fruit has come from and whether it is a better crop this year than last. He is enthusiastic about his product. A fruitier is not the same as a shopkeeper. He does not merely mind the store. He is a man as happy to receive a good-looking case of eggplants as he is to sell them. He would not sell anything less than a good-looking eggplant.

We have a favorite fruitier here. His shop is on one of the more upscale streets, and though it has more meats and fewer vegetables than another fruitier’s, we like to visit him because he is a genuinely interesting person. He speaks very good English and is always happy to practice with us. 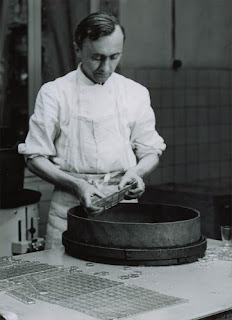 (Unlike our chocolatier, who speaks a little English but rarely to us; he would rather hold a long and boisterous conversation with us in French, even though I follow very little of it. I am always reluctant to visit him without Apollonia, which occurs often as nothing makes her happier than a gift box of whiskey-filled chocolates. He is unrelenting in his mission of making a Francophone out of me, which he sets out to do by speaking quickly and profusely whether I comprehend or not. But he is patient and I am a good sport, and he sometimes gives me a free chocolate for my trouble.)

Our fruitier is exceedingly proud of his products. “Here, smell this,” he says, as he holds a bottle of basil-flavored olive oil to our noses. “Mmm,” we agree, and he tells us the bottle has been open for three months—just imagine a fresh bottle. 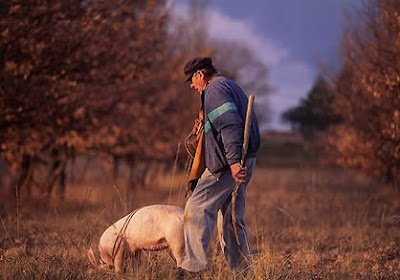 “Smell the truffles,” he tells us. We have never seen or smelt truffles before. They have a distinctive scent, earthy. “You shave a little onto potatoes, just five shavings. Last year there were no truffles—bad crop. This year we have some.” They are expensive (though not this expensive), but we promise we will try them sometime.

He tries to sell us his meats. There are jars of terrines and cans of foie gras. There is a discomfiting platter of duck legs sticking out of a ball of fat. We told him we were vegetaliens—vegans. He understood. But he still tries to sell us his meats. Each time we visit, he points to something and we have to remind him about our restrictions. “Oh yes, I forgot,” he says, but we don’t believe him.

Once, he really wanted to sell us some foie gras. Apollonia told him even if we ate meat, we would not eat foie gras, the expanded and unhealthy livers of force-fed waterfowl. “No, no, look at this. You can see by the fat, this is not like the bad stuff. I don’t eat that stuff either. Here, you see.” He showed us a marketing brochure of the foie gras he sold. Photos of happy geese in a picturesque barnyard. It claimed the geese were not force-fed. We said, “Oh, that’s nice,” quickly followed by a wait-a-minute. “You’re trying to sell foie gras to the only vegetaliens that visit you!”

His enthusiasm is inspiring. He showed us an art book containing still-life paintings. “That’s my fruit,” he said. “Look, see the figs, the cherries. It’s from here. Look at those lemons… beautiful.”

Sometimes, though, he is too enthusiastic. I was going to make a fresh tomato sauce and needed a jar of tomato paste. He didn’t have any, but offered a jar of pre-made tomato sauce. “Here, this is better. It has aubergines.”

“Better than my sauce?” I asked.

I told him I’d make my own sauce. When he rang up my tomatoes, he threw in some free parsley. “It’s beautiful parsley,” he said. “Good for your sauce.”
Avignon cooking France

Courtney C said…
You are decanting my life. It is so easy to appreciate it through your eyes. How beautiful. Thank you, it's a life worth living and loving.
February 27, 2007 at 7:18 PM

MUSTblogMEMORIES said…
I think the meat guy loves Apollonia, its clear..he is trying to challenge you. The meat guy is wondering why these vegans keep coming back, and he has pinned it as Apollonia needs to see him.
February 28, 2007 at 9:29 AM