- February 18, 2007
As part of the Contrarianism Blog-A-Thon conducted by Jim Emerson at his Scanners site, I offer this piece about an action hero contrary to our general idea of one. It may be stretching the parameters of contrarianism, but I wanted to share it nonetheless. 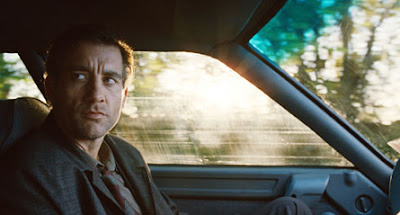 One of the many amazing things Alfonso Cuarón’s Children Of Men does is hang its story on the acts of an antihero. Not antihero in the classic Bogart sense—although Theo Faron seems to fit that mold: rumpled trench coat, hangdog expression, “I stick my neck out for nobody” attitude. No, this character is something different, a new breed. He goes against the grain of the common action hero; he is a passive hero.

Children Of Men is a classic narrative. It presents an unlikely hero given a quest. It establishes its setting and spends the second half of its running time on a flight, a chase, and a race against the clock. What distinguishes the film is the setting itself. The film is subversive. It creates a world twenty years from now, and in doing so, mirrors our own time and warns us of our trajectory. 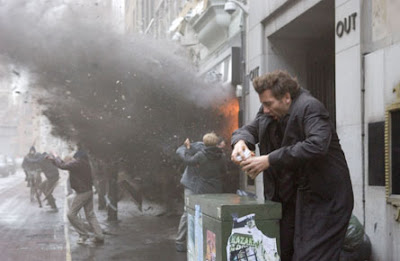 It is a nightmarish world, it says, and the audience nods in agreement as it watches images copied directly from the evening news. Here, England is a stage, and we watch the insurgency turn the streets into a warzone, illegal immigrants tortured and deported, and a government in blissful apathy.

It is a striking work, and miraculous. Films like this don’t get made at this cost, and images this visceral and troubling don’t make it into popular entertainment. I can only imagine that it was presented as a standard action movie to the studio bosses, and as it came closer to being, Cuarón added more and more subversive touches, such as having the infamous Abu Ghraib hooded prisoner stand for several moments of screen time in the background. 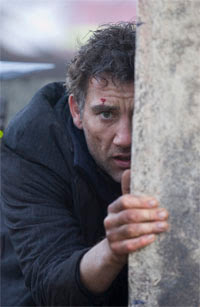 Perhaps the most revolutionary move was to make the lead character a proponent of nonviolence, whether the character was conscious of it or not. Clive Owen’s Theo Faron walks through the film, and, for the most part, simply bears witness. He is proactive: he accepts his mission, reluctantly at first and with more ardor as he goes on, and does his best to shepherd his charges to safety.

I won’t say that he is willing to serve up his life to the idea of nonviolence. Twice in the film, he raises his hand in self-defense: the first to protect himself from a motorcyclist with a gun aimed at him; the second to stop a maniacal and homicidal policeman from killing him and taking his ward.

Imagine the same film with a different director and star. The role could have easily been juiced up. In almost every frame, there is some sort of a gun or consequence of violence. Would Schwarzenegger or James Bond have made the same choices Theo made? Would they have taken on the mission without once thinking I need a gun? 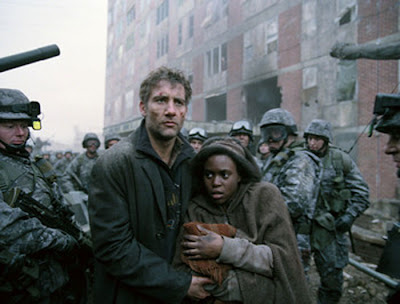 Theo never shoots a gun, never holds one. It doesn’t even occur to him that he should have one. He has a blind faith in something, whether it’s God or cosmic justice or just his own ability to see himself out of a tricky situation. Watch the scene where he must walk through the middle of a battlefield carrying the newborn baby. He has no plan here, only faith. He almost offers it as a test to himself and the people involved, whether they will do the right thing, whether they deserve salvation. 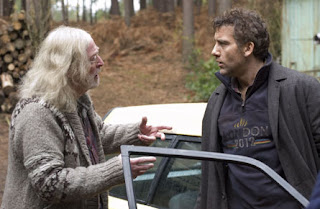 Beyond his actions lies his character. He was an activist twenty years ago, a champion of peace and justice. After losing his son and wife and seeing the entire world fall apart, there is little light left in him. He is without hope or joy. He plods on in his life of drudgery, getting by seemingly on slugs of whiskey and the odd visit to his hippy friend’s hideaway in the woods, a last bastion of an old way of life. These two points are telling, his activist history and his still-active dialogue with his peacenik friend. Theo had principles once and may still have them, but he’s been overcome by hopelessness.

As the story gains momentum and Theo becomes more involved, we see him slowly open up. What was dormant in him is waking, and his actions throughout the movie are informed by a mixture of his indifference to the state of the world and his old commitment to a better tomorrow. He remains maddeningly passive sometimes, as though he were frozen in ambivalence, his base instincts deadlocked with his higher values. Sometimes Theo must choose between saving the world and saving his soul, and twenty years of life on a consistently decaying planet has made it a hard choice.

The story of Children Of Men is Theo’s story, as he tests himself and the human race to find them worthy of salvation. He makes few compromises with his values, frustrating and suicidal as it seems sometimes. In the end, he has completed his task, but the peace he feels in the final shot has a more personal source than world-saving: he has arrived at his destiny, and come pure to it. 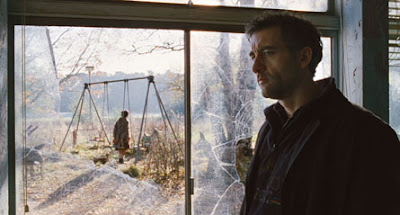 Anonymous said…
An excellent take on the post-post-modern action hero, indeed. Does Theo actually survive to enjoy the peace at which he arrives, or does he quietly lose his mortality as a result of his wound? I got the impression he was able to realize the fruits of his labor (no pun intended) right before dying.
December 5, 2007 at 9:24 PM

Anonymous said…
Dan Zukovic's "THE LAST BIG THING", called the "best unknown American film of the 1990's" in the film book "Defining Moments in Movies" (Editor: Chris Fujiwara), was finally released on DVD by Vanguard Cinema (www.vanguardcinema.com/thelastbigthing/thelastbigthing), and is currently debuting on Cable Video On Demand. Featuring an important early role by 2011 Best Supporting Actor Oscar Nominee Mark Ruffalo ("Shutter Island", "Zodiac", "The Kids Are Alright"), "THE LAST BIG THING" had a US theatrical release in 1998, and gained a cult following over several years of screenings on the Showtime Networks.