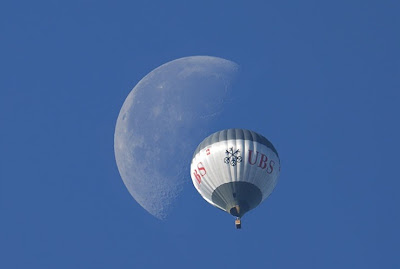 In a short story by Edgar Allan Poe, a man flies to the moon in a hot-air balloon. The story ends deflated, revealed as a hoax, but Poe’s description of the journey to the moon is so filled with possibility that all I can remember is an image of a man very high above the earth, suffering from a change in the atmosphere—but accommodating it—and rising higher until he leaves blue sky altogether and floats gently and speedily to our very moon.

I read the story 170 years after it was written, and it was so improbable and scientifically untrue, I couldn’t help but think that it wouldn’t have flown with its original audience either. But why did I believe it? 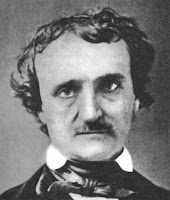 It was written with great attention to detail and a full confidence that although the story hadn’t taken place, it was inevitable that it should take place. Poe knew full well that he wrote a lie, but he described the journey so completely and with so much verisimilitude that he seemed to be in defiance of himself. He guides us to the moon in one of the most incredible feats of scientific fiction ever written, and only recants at the very last as a capitulation to reality. He had allowed himself a brief flight of fant’sy, and then was grounded.

Poe allowed himself a feeling of wonder—he wrote about that balloon trip because he wanted to know what it would be like and there was no account of it for him to read. There is a wealth of “stories to amaze” written in the nineteenth century. Jules Verne traded in them. And they all seem to be based on bad science.

But somehow this allows a more awe-inspiring world. In spite of the many great things a better understanding of science has done for us (including creating more and more situations for authors to “get it wrong” and make new and impossible scenes for us), it has killed all the best things in the world: superstition, shamanism, and wonder. 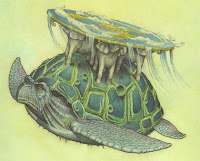 It is fascinating to know the exact date of the Big Bang and how many quarks it takes to change a light bulb, but it leaves little room for subterranean seas lit by perpetual lightning and planets perched on the backs of tortoises. Sure, I admit that a moon elevator is going to be very cool, and just reading matter-of-fact articles about colonies on the moon within the next fifteen years gives me gooseflesh. But it all seems to be at the expense of something more important.

Wonder makes us human. The great gap between our species and all the other creatures on Earth is a consequence of our wondering at what laws govern the world. And we have created some wild laws in our history. Who remembers the one about throwing a dead cat over your shoulder in a graveyard at midnight to get rid of a wart? 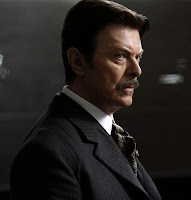 Perhaps I feel left behind. It is said that until the twentieth century, a layman could have an almost total understanding of the branches of science. But with the introduction of the theories of general relativity and quantum mechanics, it has all accelerated far beyond the grasp of just about everybody on Earth. There are people who know a lot, but nobody knows all of it, and the common person knows very little of it. All we know is that there is an answer to our questions, but it is beyond our understanding. We’re better off not asking, or wondering.

So, I want to honor some of those artists who have kept a sense of awe alive in me. What follows are some of my favorite films or cinematic moments, all which have given me the most prized feeling I could have in a theater: wonder. 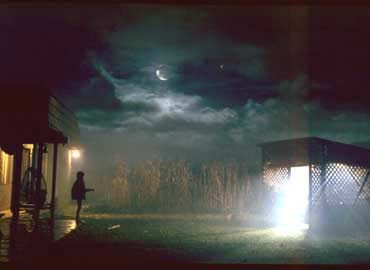 E.T. The Extra-Terrestrial
The greatest of all films about childhood, it is imbued with a childlike awe. It was Spielberg feeling loose between big films and he seemed to have channeled his own boyhood. He has a trademark on wonder: intense, blinding light; shooting stars. Close Encounters Of The Third Kind may actually fit more perfectly as a film about the great unknown, but there are few more favored images than the final shot of this film, with Elliott looking up at the sky, the setting sun casting an orange light on him: it is not the last time he’ll watch the skies. The end of the film is the image of the boy Spielberg looking up with awe and coming back with a story. 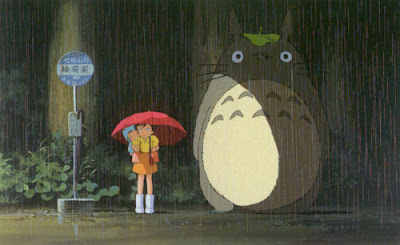 The Films of Hayao Miyazaki
Here are some images: The children in an underground cave lit by luminous stones or in a deserted garden floating high above the earth in Laputa: Castle In The Sky. In My Neighbor Totoro, the little girl Mei finds a passage through thick shrubbery into a picturesque wood. She follows a trail until she reaches an enormous camphor tree, then falls into a hole at its trunk. She lands in a dreamlike den—on top of a giant, furry, owl-bear creature. 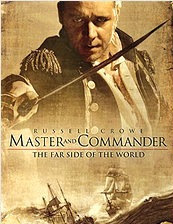 Master And Commander: The Far Side Of The World
All of a sudden, the world was large again. I responded not only to the adventure, nor the action, nor the camaraderie. This is a film that excited me about Galapagos more than anything I have ever read or seen. There is such a feeling that the world is expansive and miraculous, and we are ever ready to dive into danger for the understanding of it. I have praised this film for as long as I have known it; it is one of the greats.

Have you had a similar experience from a film? Tell about it in the comments.
film science wonder

Courtney C said…
My blue eyes grow wide at the wonder you express in these times of great tempest. I appreciate that all is not lost, we may know the latitude and longitude of all the worlds tides, but hope, vibrancy of imagination, and ancient beliefs are important still. They keep us alive. We are all children of men or is it womyn. We touch the moon daily though we fail to yield to her magnificance. Our arrogance will befall us. Men, are lost in the colonization. We just want to touch, and dream, and cry for what we, as humans, are and could have been. Magic, so nice to see in a world that seems to be drowning.
February 21, 2007 at 8:07 AM

River Cougar said…
I was just commenting to woody about the beinning scene of "kiki's delivery service" when she is sitting by the sea listening to the transistor radio. the grass is so beautiful. it is one of my favorite times in cinema history. We saw that grass this week at pt. reyes. it was shining, glistening and blowing in unison. beauty. add a thousand elk and a beuaitful sunset over the pacific ocean with the entire north coast in view. ahhh...


off the subject though... The pretige was amazing. i never thought i would enjoy a magic story so much.

we watched The Host today. it was an amazingly original film.

children of men is one of the most realistic apocalyptic stories of all time. watching the film is so tiring because it is so enthralling.

woody is also successfully turning me into a justice league fan that doesnt read. I love the tv show and the batman animated show. we just might have batman and woderwoman on top of the wedding cake :)
March 2, 2007 at 10:40 PM