Review: The Last King Of Scotland 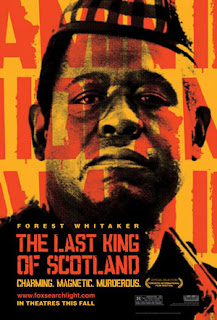 Forest Whitaker gives an intense, unnerving performance as Idi Amin, the charismatic and maniacal president of 1970s Uganda in The Last King Of Scotland. It is a performance outside of the film’s league, which tells the recycled tale of a white man in Africa working selflessly to better the lives of those who need it most. Late in the film, Amin declares that he will donate money to help feed the starving people of Great Britain, who suffer from labor strikes and unemployment.

Thankfully, the film isn’t as sanctimonious as its genre tends to be. The white man here is a young Scottish doctor, bored with home and ready for adventure. He comes to Uganda on a whim, and on his first day there delays his bus trip in order to have a sexual tryst with one of the many beautiful native girls that populate the film. It is the first of many boneheaded hedonistic acts that will deliver the doctor to his comeuppance and loss of innocence. 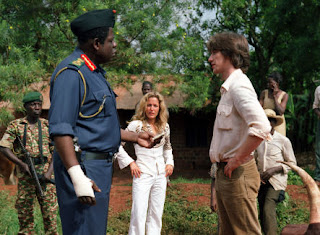 It is the popular, overriding theme in cinema these days: the loss of innocence. But whereas in the past a story was a story and sometimes a cautionary tale, now filmmakers feel obligated to steal away their audience’s innocence, and we are compelled to watch. Crash, Babel, Blood Diamond, and countless other films exist not as classic stories, but as vehicles to deliver an urgent message: the world is getting worse and you are getting more apathetic.

There’s a war on, of course, and we’re bound to suffer our part. But how do we interpret this feel-bad cinema? I was ill-prepared for this movie’s gruesome realities as I snacked on popcorn and Coca-Cola and enjoyed Whitaker’s rollicking work as the magnetic Amin. Perhaps that’s the point. Next time I won’t buy the Coke, a brand whose image and foreign policy can be summed up as America: The Soft Drink.

I am reminded of Children Of Men, a movie in a world as dark as can be envisioned, though imbued with hope, and I imagine that if there are any cinemas left, they’re playing films like these. No wonder no one’s having any babies anymore—Fred Astaire is dead.

We still escape to the movies, but what we hope to find there is not an ease of our physical suffering, but our mental anguish. We are guilty people, and these movies provide pat, easy answers to the questions that trouble us. 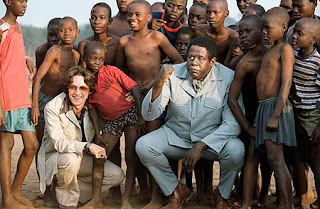 Technically, the movie is nothing new. Beautifully filtered shots of Africa contrast with sharp and grainy images of the movie’s characters indoors. The camera shakes and pulls in and out of focus for verisimilitude, and action scenes are cut fast to bewilder and muddle.

I wish the movie had a stronger foil for Amin. The doctor is a blank, easily sucked into the pimp’s life Amin gives him and quickly horrified to find where it all came from. Idealistic young doctors do not accept new Benzes from presidents of poor countries. I was not surprised to find that the character is fictional. He is too naïve, a moviemaker’s approximation of the average person. There is another British character in the film, a government man reviled by the young Scot, who is far more interesting than our hero.

The film exists for me solely as a record of a great performance (and a particularly grisly image of a corpse that I can’t quite shake). Forest Whitaker, always a gentle actor, is literally bursting out of his general’s uniform as he sweats and smiles and rages across the screen. He is believably unpredictable as a man who might kiss you or squash you depending on his mood. Most of the squashing takes place offscreen, and I am left with the image of an energetic, smiling bear. After all that, I’d still like to know him better. 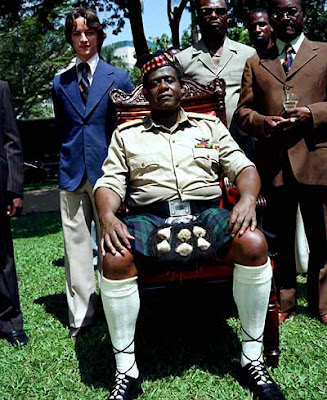