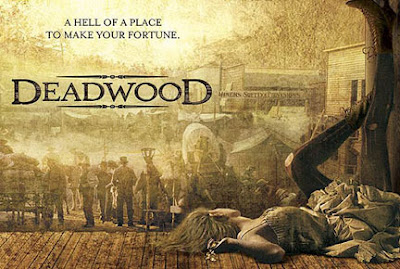 Most striking about Deadwood, creator David Milch’s revisionist western series, is its sense of place. The show is exquisitely photographed, staged grandly and with an obsessive eye for detail, and cast perfectly. It is less a narrative than an evocation of a lost place and an elegy for a lost time. I recall Deadwood the way I recall real towns; it has the ability to ignite all of my senses. The muddy streets, the glowing lamplight, the never-ending din of the bustling crowds, the stink of manure and human filth, and the sweet tickle of a lady’s perfume are all impressed upon me as truly and permanently as the heat-stroke sewer-stench of Manhattan and the baker-blessed stoniness of Paris.

Deadwood is the new paradigm of the west, the way Saving Private Ryan became the template for cinematic combat. Everything before was whitewashed kid’s stuff, typical Hollywood misguided refinement, or ignorance. Deadwood is early America as rough and Darwinian, survival of the meanest, and all in service of an unstoppable and inhuman progress. 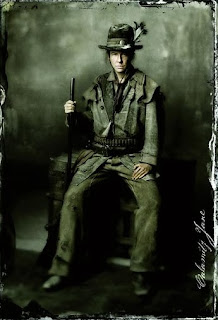 Deadwood bears the influence of Clint Eastwood’s late westerns and especially Robert Altman’s McCabe & Mrs. Miller. Its aim is to present a Wild West without romanticism, albeit with an irrepressible human fascination with despair. If there’s an allure in life in Deadwood, it’s in the promise inherent in Deadwood’s existence: a new town, a new life. America is the land of opportunity, although opportunity always seemed to be just west of where you were.

Al Swearengen, played by Ian McShane as a heroic villain, a sociopathic time-bomb, a man of high intelligence and little compassion, is the great hideous beating heart of the show. He feeds on power and has done more to build Deadwood up from the ground than any other character. He’s the quintessential American capitalist, vicious and Machiavellian, and he’ll undo himself in his greatest hour, when Deadwood emerges from its original chaos into a lawful and viable town that holds no place for the mean men who built it.

Deadwood is a powerful telling of the early days of the modern world, The Godfather steeped in pigshit and Shakespeare. These are simple people pushed by their environment to collaborate and manipulate; in Deadwood, you don’t feel accomplishment at the end of the day, you feel survival. The sheriff-turned-shopkeeper becomes a lawman again not so much out of duty, but because stronger men require it of him. And the newly powerful wealthy widow finds herself able to hold her own against the willful villains around her. 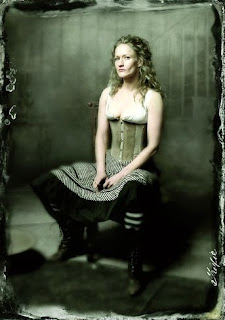 Half the fun of the series is in its dialogue, a sublimely weird hodgepodge of the Queen’s English, preacher’s sermon, scoundrel’s beguiling con, and a heap of dirty, dirty words. Milch suggested that for many of these people, the Bible was the only lesson-book of the English language, and, mixed with the vernacular of the rough men who did most of the shaping of America, you have speech almost Shakespearean in its royalty-to-groundling inclusion.

David Milch has raised up a real and true Wild West, never before seen by a nation in love with its own mythology. Deadwood the series shows us Deadwood the town, in all its filthy grandeur. But in spite of its achievement in the presentation of the violence, despair, and haphazard meting of fate in uncivilized America, the show is most accomplished when it is quiet. Deadwood is interested in real people, the faces that stare out of old photographs like flyspeck phantoms. The secret of the show is in the sad, careworn eyes of its characters: Trixie the whore, drunken Calamity Jane, doomed Wild Bill, even Al Swearengen, who acts like a man expecting Death to catch up with him at any moment.

There are few comforts in life for the townsfolk of Deadwood, but when they come, they ease the burden just a little bit, and allow that much more hope through. Insufferable Deadwood seems a town fashioned out of hope. There are no dreams of heaven like those of hell’s sinners. 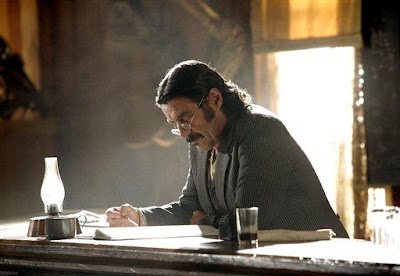