State Of The Union 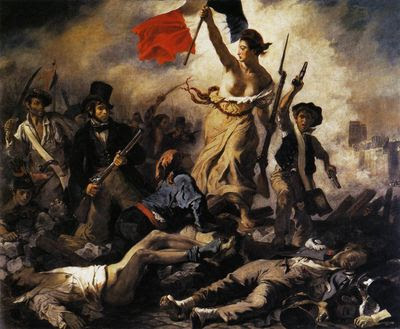 We are in the midst of a presidential election here in France. I have not followed it except in the international section of the British newspaper The Guardian, where I also read the news of the American election a full year-and-a-half before it will take place.

I will write with as little hint of ignorance as I can. The candidates here are M. Sarkozy, who currently holds some kind of office and is the chosen successor to the retiring President Chirac. He has been in a tight race with the Socialist candidate Mme. Royal, who has caught flak recently for undervaluing her expensive vacation home on her tax documents. It turns out this socialist candidate is quite a wealthy person; she is one of those people who would lose out in the socialist equalization of wealth.

M. le Pen represents the far right. I know little about him, except that some raw graffiti on a wall we passed on our country hike declared him the Nike Hitler and that he belongs in his tomb.

France is a country in turmoil, but it always has been—at least since they learned you could imprison and decapitate your leaders in the name of social justice. Now they are burning cars, because, I suppose, people care little about the lives of their politicians these days, and the death of one would do less damage to me than the loss of my Citroën. 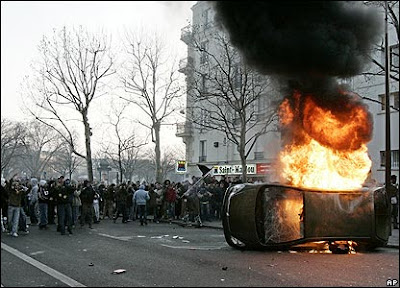 Politics is devolution, a horrible backwards institution like a reality TV show with real casualties. I am reminded of a science fiction novel in which a genius youth is raised as a military commander and trained with combat video games—the twist is that the army he commanded in the virtual world turned out to be real. Every life lost in the game was a real one, and he conquered his enemy without knowing it.

These politicians—and I am talking about the American ones, whom I have more experience with—play at world dominance and diplomacy as if it were a game, or worse, their manifest destiny, a challenge issued from God himself.

And how are we engaged in this? We watch them the way we watch Lindsay Lohan or Britney Spears, waiting for the next breakdown, the end of their idiot careers. But we are involved in another way. We are their sport. They don’t represent us; they move and bully us and sacrifice us, pawns engendered to die for their king. 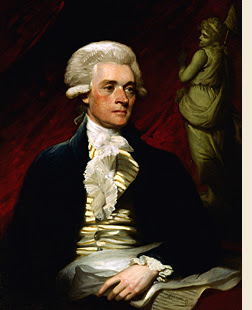 Apollonia mocks me on occasion for being too patriotic, too American. This because of my admiration of our Founding Fathers, a group of enlightened, relatively young men who set about to create the perfect system, a form of government that included everyone. I have also been derided for reading a text on the Constitution at this late stage in my life. It is an admirable work, the envy of all the world, but perhaps too noble for the modern era. It is too easily manipulated.

I am kidded because I do not commit the idea of America to the dustbin. But it’s the best idea going, and what’s more, it can be saved at any moment. I’ve voted for Ralph Nader in the last two elections, and if it came down to him, Barack Obama, or George Bush for a third term in the next election, I would vote for Nader again. If he doesn’t run, Dennis Kucinich is my man. Nothing against Obama—it is only that I must vote for the person I would trust with the presidency, and if that means I vote for a loser, at least I did it with my conscience, which is more than most politicians will do.

It’s become an awful show, this presidency, this Congress. They continue to get away with all of it, and they laugh at us, they oppose us on everything: the war, the environment, healthcare, education. The rise of The Daily Show and Colbert Report may be doing us a disservice. It creates a comfortable pocket of dissent, like the high school student who had to suffer the idiots and got by on ironic mockery. We don’t have to suffer, this isn’t high school—the system can be changed at any time.

I’m over here in France, rambling about what they’re doing back home. I read the newspapers and listen to the radio, and it’s one headline after another, like slaps in the face. I can’t believe they’ve gotten away with it for this long. And I’m as guilty as anyone. I’ve been to some marches and have sent many letters to my representatives, but I’ve hardly done my part to make the world better. So allow me this one post to say that I am an American in love with the idea of America—it is only that I have never actually seen that idea in action.

Somebody save us.
America France politics

Cathy said…
Truly a few words of wisdom from the young, the generation that will inherit the mess we have made!
March 22, 2007 at 6:14 PM