The Discreet Charm Of The Bourgeoisie

There are fifty-three episodes of the late sitcom Arrested Development. This is a longer run than many failed shows are able to achieve, and three or four times the amount of episodes of nearly all British comedy series. This includes Fawlty Towers (12 episodes), The Office (14 episodes), and Monty Python’s Flying Circus (45 episodes). By these standards, it had a good run, and, like those timeless shows, its wealth has been secured for posterity.

Why, then, the indignation? Why the great sense of loss? Why can’t we let go of the fact that Arrested Development is dead dead dead, no matter what we heard of Showtime wanting to pick it up or a possible feature film? 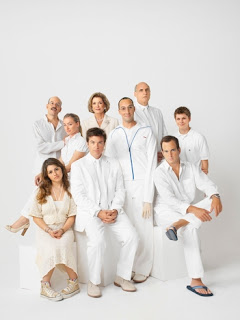 It debuted in November 2003 to critical acclaim. It was an instant classic, something unlike nearly everything else on television: a single-camera farce, irreverent as Python, fast as Fawlty, and more brilliantly cast and timed than anything since Seinfeld, or beyond. In short, it was the very best comedy anywhere on the planet, which may sound a tad subjective until you sit down in front of the damned thing and miss every second and third joke because it moves faster than you. A good part of the fun of watching Arrested Development is in re-watching it and catching all the laughs you missed: the puns, the reaction shots, the self-reflexive and referential narration.

Arrested Development is a show made for repeat viewing. It is consistently brilliant and it moves fast—both in the amount of jokes per minute and the way it never pushes a joke or scene too far. It treats its audience intelligently, and assumes everyone can follow along, and if they lose you on one joke, don’t worry, because the next one has already arrived.

The show follows the farcical antics of the Bluth family, a dysfunctional band of misfits, and the trials of Michael Bluth as he attempts to hold the family and its business together in the wake of patriarch George Bluth’s arrest and imprisonment for various white collar crimes, including “some light treason”. 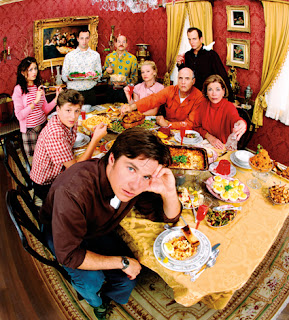 The characters are broad caricatures of a silver spoon family whose easy lives have left them ill-prepared for sudden hardship, and the joy is in watching them try to uphold their decadent lifetstyles even as decadence’s inherent decline takes hold. Nothing is sacred in this family, in spite of Michael’s insistence that family (and not breakfast) is the most important thing. Responsible and noble as he asserts himself to be (and usually is), Michael is not above the scheming and infantile hijinks that serve as the preoccupations of the rest of his relations.

Ask any ten fans of the show who their favorite character is, and you’ll get ten different answers. My loyalty changes many times during an episode. Michael serves as the show’s anchor, the relatively straight man, but Jason Bateman, in a surprising and welcome reemergence, plays him with brilliant timing and ironic remove—he’ll make the joke before you have a chance to.

Other standouts include Gob (George Oscar Bluth, pronounced Jobe), a bad stage magician who zips around on a Segway, charms women, and plots to wrest his father’s fortune from Michael’s control as he also endeavors to become his father’s favorite child. Gob may own the show’s best moments: he sings “Ebony & Ivory” with his soul brother puppet and does a chicken dance that exists outside of all others—it’s not even chicken anymore. 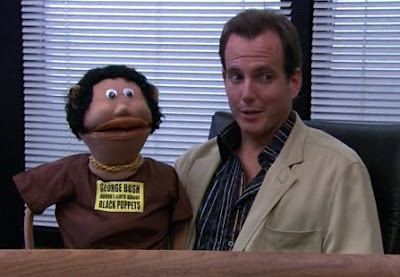 Michael’s son George Michael, a smart-dumb kid secretly in love with his cousin, has got his father’s irony and the rest of the family’s selfish obliviousness.

Even the narration is brilliant, as performed by Ron Howard, the best of anything he’s done since Happy Days. He’s irreverent and self-reflexive, and always willing to mock the characters. In a typical scene:

Its respect for the audience’s intelligence may have been the show’s undoing. It was too smart for American television, too fast, and too irreverent. It was a series made for television writers and critics, and, just maybe, HBO. But there is no mass audience for anything this smart. Arrested Development is the one that got away twice, a series miraculous in its making and too commonly cold in its reception. Of course we lost it, shining anomaly that it was, bright flash of a better tomorrow. A show like this has only one purpose: to die fast and pave the way for shows like it in the future, when America catches up.

But there are fifty-three episodes existent, and it is every bit as worthy of viewing and re-viewing and memorizing and quoting as any series before it. I dare anyone to go to the massive quotes page at IMDb and try not to get sucked in. One of my favorite quotes from the series:

Or, from the same episode:

Narrator: The family continued to chant, “Speech! Speech! Speech!” for no one in particular.
Michael: Gee, after all that, I was hoping someone would make a speech.
Buster: Speech!
Michael: All right, I’ll say something.
Gob (under his breath): Typical.

In a weird instance of poetic justice, Microsoft has bought the existing episodes to show off its streaming video player and attract viewers to its site. The entire three seasons will roll out throughout the next few months and almost all of season one is online now at arresteddevelopment.msn.com. It is not the best way to watch Arrested Development (and if you have a Mac, nearly impossible; I’ve had success with Firefox). But Arrested Development seems designed for this type of viewing: perfect in small amounts and always successful, no matter what you watch. It’s a new daily comfort: a cup of coffee to knock sleep out of you and a shot of the Bluths to put you in a good humor. 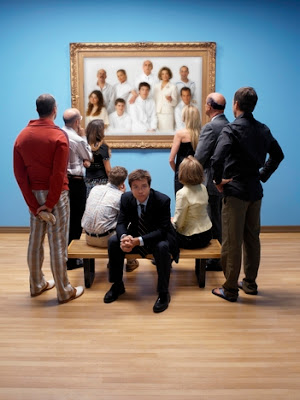 MUSTblogMEMORIES said…
Damn you Ry! Its a funeral that I don't enjoy revisiting. Its hard, you see a magician or a banana stand out there and you just want to breakdown and ask why? why? why? I could finally enjoy Portia. Jason Bateman was born to do this role. George Michael had great timing. Maybe, ehh..I could take her or leave her. Tobias and the blue man group.

Coleen said…
I finally found some followers of the show outside of our family. I just laugh and laugh when i play it in my head. I will agree with Janice about Jason Bateman. I enjoy anything that come out of Gob or Buster. Oh man, I really love that show.
March 28, 2007 at 10:15 PM

Reilly Owens said…
I love George Michael. That kid is perfect. Everyone else takes it over the top--perfectly--but he keeps it quiet and close, with natural reactions and a mix of sarcastic wit and naivete.

What makes its loss hard for me is now we start to see the actors pop up in movies and other things, and you know that nothing they ever do is going to be as good as the show. Even if they don't make Arrested Development anymore, I want the Bluths to keep working together.
March 29, 2007 at 4:47 AM

Coleen said…
I feel the exact same way. First, I saw Geoege Sr. and got upset, then Gob, and now Buster. I enjoyed when George Michael and Maybe were on Veronica.
March 29, 2007 at 8:26 AM

Karen said…
I am so glad you guys forced me to sit and watch the first season at Christmas. I sing the "Mr. F" tune almost everytime I speak to my coworker Frank and then I laugh to myself. I am just sad that I do not have it ready available to just go to every now and then and get my fill of Bluth psychosis.

My sweetheart is a Canadian, those reasonable and quiet folk from the North. I am an American. We met in New York, and, as my style of flirtation is good-natured contrariness and gentle ribbing, we have been arguing about the merits of Canada from the beginning. It is a favorite pastime of Americans to slight their northern neighbors (well, all of their neighbors), and now that I am faced with a true Canadian, and having consequently visited Canada and been in real conversations with many of her kind, I have had to question my feelings about the country and its people. Wherefore the lack of goodwill? After many rounds of verbal sparring and some introspection, I came to the decision that Americans show dislike of Canadians for the very reason we love ourselves. They are not what we are, and because what we are is loud, brash, and prideful, we are caught in a cycle of egotistical self-inflation and outward depreciation of everyone that is not us. It is who we are. Within a short and wel
Read more