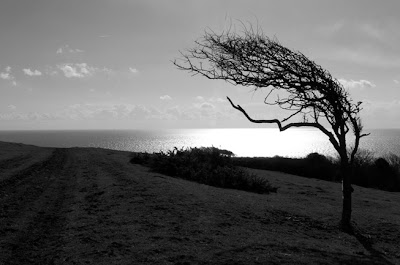 The wind shakes the walls, the roof. It blows everywhere: it skips you over the grass in the field; buildings form canyons like wind tunnels. The thermometer reads for a picnic, but when you stick your head outside the weather-sealed window, you doubt you’ll be outside longer than it takes to buy dinner.

It is the mistral wind—the master wind—that blows from the Rhone Valley toward the Mediterranean. Our walled city is pummeled. Lines of trees form windbreaks outside of town. Shutters remain closed throughout the day.

There’s loneliness in the wind. It carries French voices up to our fourth floor windows. It bellows louder than our home sounds. Billie Holiday sings in 1945 and we listen to her dead voice moan with the wind, not over it. Sometimes loneliness won’t be restrained.

We were kids and there were more of us then. We sank in oversized furniture under heavy blankets. We had no reason to be unhappy, though sometimes we were. Still, there was no reason and it didn’t last. Now we remind ourselves that we are happy, and hold up the reasons like evidence in court. I offer exhibit A, your Honor: two strong legs. And exhibit F: a well-stocked kitchen.

But we are defendants as well as prosecutors: “Everyone’s got those things, your Honor, and more besides. Ladies and gentleman of the jury, there’s a great pie out there, and I only want my piece of it. Why, if I had that, I’d be swell from here on, and not another peep out of me.”

We were kids and the wind shook the whole house, propped on cinder blocks. We went outside to watch. Sometimes a tree fell, sometimes on your bedroom. We got older and had to cut down the trees so they wouldn’t fall on the house.

It’s not too quiet until the wind blows. When you hear that, you know the stillness. Life bustled once; now we float around in aquariums and the wind shakes us like furious parents.

We’re not lonely, because that takes acknowledgement. We’re only alone. We were always alone, everywhere, except when we were kids. We’ve got anxiety now, and responsibility.

Maybe it’s just me, locked in my apartment to make the words come out. Reading someone else’s words so the magic rubs off—or maybe to use them as lubricant or laxative. French voices float up from the street. Shouts of laughter whip past in the mistral wind. I trudge on, dredging the past or the past future, where I was going to be something else. We never imagine the work, the long, lonely hours with ourselves, reflections of reflections, until we can’t find our true flesh in the house of mirrors.

Or perhaps it’s the wind that blasts us, dusts us, shoves us, and whips us. Every lonesome thing happens on a windy day.
family loneliness weather

MUSTblogMEMORIES said…
Is it weird that I am never "lonely?"

I was asked if I get lonely on my daily strolls since there is no one to speak to that talks back...I said no..I talk outloud to a baby all day long. I talk to the lady at the gap, I smile to everyone who passes by. I think my fear is to be lonely, so I over extend myself to the world.

I have given my 11 week old baby a personality, that way, he is entertaining to me and a person instead of this kid who is always around me because he has to be.

I just drove 12 hours yesterday with Irene in the car..maybe she wanted to sleep? I never let her though..always something to say, or me singing outloud..if she was asleep..maybe I would be lonely?
March 9, 2007 at 10:22 AM

Sister K said…
It does take so much work to reflect, to become the someone and do the something you are supposed to. It is so much easier to just watch tv or get busy in a thousand different ways. I am glad you wrote that- thanks.
March 9, 2007 at 8:03 PM